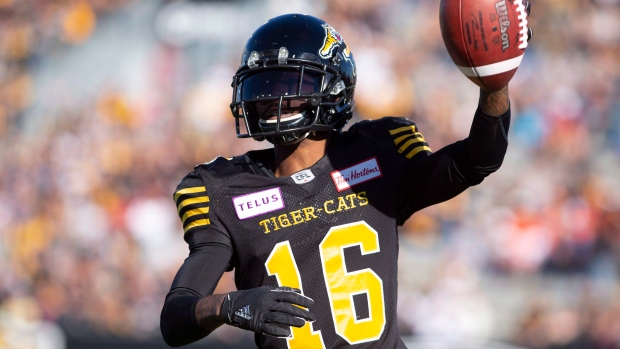 HAMILTON — They've clinched first place and home field for the East Division final. On Saturday, Dane Evans and the Hamilton Tiger-Cats will look to secure a spot in the franchise's record book.

Hamilton (12-3) hosts the Ottawa Redblacks (3-12), needing a win to set a single-season club mark. Watch the game live at 3pm et/1pm pt on TSN1, TSN Direct, and streaming on TSN.ca.

This marks the third time the Ticats have reached the 12-victory plateau (1989, '98). Hamilton lost in the Grey Cup the previous two occasions.

"It's super important," Evans said Friday regarding a record-setting 13th win. "We've been talking about it all week.

"It's something that hasn't been done here. It wasn't our main goal when we started training camp but our goal each week is to go 1-0 and obviously if you keep doing that you're going to reach a point where we are now. We've got a good thing going so let's just keep it rolling."

Hamilton is 7-2 since the six-foot-one, 218-pound Evans assumed starting duties after incumbent Jeremiah Masoli suffered a season-ending knee injury in a 23-15 win over Winnipeg on July 26. The Ticats are also the CFL's only unbeaten home team, sporting a 7-0 record at Tim Hortons Field.

But although the Redblacks are riding an eight-game winless streak, they've won five straight at Tim Hortons Field. In fact, Ottawa hasn't lost in Hamilton since 2014.

Regardless of the Redblacks' losing streak or where they are in the East standings — tied for last with the Toronto Argonauts — Evans said the Ticats must focus on protecting their home turf.

"We owe it to (Ticats fans) to put on a good show," he said. "They've been supporting us through thick and thin and we've just got to come out there and get this win for them."

Evans, in his third season with Hamilton, has been especially sharp in his last five starts, having completed 136-of-174 attempts (78.2 per cent) and averaging 355 yards passing with 11 TD tosses. But with the Ticats having clinched first place, the question remains just how much Evans — and other starters for that matter — will play down the stretch.

"As far as I know I'm playing every game, that's how I'm preparing for it," Evans said. "It's pretty easy for me . . . I just prepare how I always do.

Hamilton rookie coach Orlondo Steinauer said while he wants the Ticats to finish the regular season strongly, he'll be mindful of doing what's right for his players.

"It's a unique situation," he said. "There are some challenges but once our roster is set everybody who's going out there is expected to play hard, we're not holding anything back.

"There will be some strategic decisions that we'll make throughout the game and the last two weeks. But as of right now things are set and we're ready to go."

With a win, Hamilton can sweep the season series versus Ottawa after the Redblacks went 4-0 in 2018 against the Ticats. Despite the drastic turnaround, Steinauer said his club isn't looking past Saturday's opponent.

"They do have three wins so that means they've beaten three football teams and we want to make sure it's not four," he said. "Their record is what it is but they're putting together a game-plan to beat us.

"I'm familiar with their coaching staff, they're well coached — you can see that in all three phases. I feel like they're physical and as the saying goes, anybody can beat anybody. So it hasn't been a challenge keeping our guys focused but again talk is cheap. You have to go out and prove it."

Quarterback Will Arndt will make his second straight start for Ottawa. The 26-year-old rookie from Western Connecticut State completed 28-of-42 passes for 288 yards with two TDs and three interceptions in last week's 28-21 road loss to Toronto.

NO PLACE LIKE HOME: CFL teams are a stellar 43-26 at home this season. The Ticats are leading the way in that category as the league's only unbeaten squad on home turf.

BANNER SEASON: It's been a stellar '19 season for Hamilton receiver Brandon Banks, who has a CFL-leading 94 catches for 1,233 yards with nine TDs — tied with B.C.'s Bryan Burnham for the overall lead. Banks needs just one more reception to set a career high and has a TD grab in four straight games.

ROAD WARRIORS: Ottawa is tied with Toronto for fewest regular-season wins (three) but has enjoyed success on the road than at TD Place. The Redblacks are 2-5 on the road compared to just 1-7 at home.