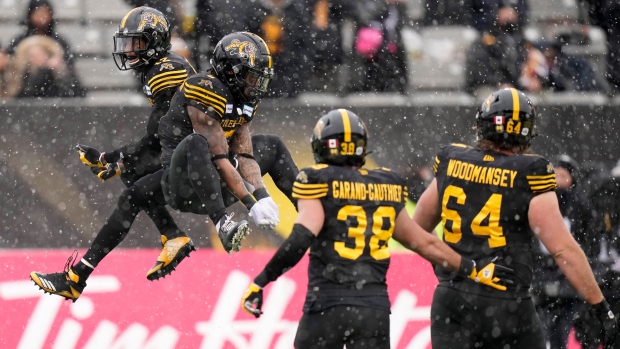 HAMILTON — Ja'Gared Davis and the Hamilton Tiger-Cats will get one last shot at the Toronto Argonauts.

Davis anchored a stout Hamilton defence that registered six sacks and five turnovers in a 23-12 East Division semifinal win over the Montreal Alouettes on a snowy Sunday afternoon. The Ticats will visit their arch rivals next Sunday, the fifth meeting this season between the two.

Toronto (9-5) won three-of-four regular-season meetings to finish atop the East Division, two points ahead of Hamilton (8-6). The two franchises will meet in the conference final for just the third time since 1986.

"I know they're going to come all guns blazing and I expect us to do the same and (may) the best team win. I trust the guys I've been playing with all year . . . regardless of what happens in the game, we'll find a way to come out on top."

"We knew all week the game was going to be decided up front," Davis said. "So we just took it upon ourselves to come out and just impose our will the best we can."

Hamilton dodged a huge bullet when Papi White lost a punt-return fumble with 5:30 remaining in the fourth quarter. But the Ticats were successful on their challenge of no-yards on the play to maintain possession.

Montreal drove to the Hamilton 10-yard line before a turnover on downs. That gave the Ticats the ball with 1:38 remaining, but they surrendered a safety 40 seconds later.

"Like any football game, it always starts up front," Hamilton head coach Orlondo Steinauer said. "Those turnovers we got, they were huge.

"While we gave up a lot of yards we didn't give up a lot of points and I thought that was the difference. When you're able to take the ball away, it definitely offsets those plays they were able to make."

Montreal held the ball for over 33 minutes and amassed 410 net yards. And while starter Trevor Harris was 28-of-44 passing for 364 yards and a TD, he also had an interception and lost three fumbles.

"That's why turnovers are always the No. 1 predictor of who wins football games," Harris said. "It had a lot to do with turnovers and field position and us putting ourselves in bad situations.

"The plays were there to be made and it sucks. I really feel like this football team had something special and it starts at the top with (head coach) Khari Jones . . . he's amazing."

The two teams split their season series 1-1 with each winning on the road. But Vernon Adams Jr. started both games for Montreal before suffering a shoulder ailment that resulted in the Alouettes acquiring Harris from Edmonton.

On Monday, Alouettes linebacker Patrick Levels guaranteed his team would emerge victorious. Afterwards, had no regrets about making the comments.

"That's how I play the game. To win," said Levels, who had a tackle and forced fumble. "You have turnovers, you get scored on, you lose the game.

"Being ready is one thing, making plays and executing is another and that's where I feel we lacked today. We just didn't execute."

Montreal also didn't help itself with 12 penalties for 115 yards. Hamilton was flagged five times for 60 yards.

"I still love the fight that our team has, the pride they have. They never gave up and we just didn't make enough plays."

Hamilton's offence struggled for much of the contest, accumulating 237 total yards. Starter Jeremiah Masoli finished 18-of-28 passing for 184 yards and a TD.

"At the end of the day in elimination football, you'd like to sit here and say that you've got to be clicking in all three phases," Steinauer said. "But that's simply not the case.

"You need one more point than the other team."

Montreal kicker David Cote had a field goal and convert.

Hamilton had the ball for just nine minutes 59 seconds in the first half but took advantage of Montreal miscues for 20-3 half-time lead.

Domagala kicked a 37-yard field goal on the final play of the half. It was set up by Stavros Katsantonis's interception and return to Montreal 54 with 29 seconds remaining.

Domagala connected from 38 yards out at 13:54 to put Hamilton ahead 17-3. It came after Wynn recovered a Harris fumble.

Jackson's six-yard TD run at 12:44 gave Hamilton a 14-3 advantage. Masoli had put the Ticats ahead 7-3 with a 20-yard TD strike to Banks at 8:24. It came two plays after Howsare returned a Harris fumble 45 yards to the Montreal 22-yard line.

"We were in at least field-goal range before we got the turnover," Jones said. "It just kind of changed the momentum of the game."

Cote kicked 17-yard field goal at 9:42 of the first. It capped a 13-play, 95-yard opening march for Montreal that included two roughing-the-passer penalties.