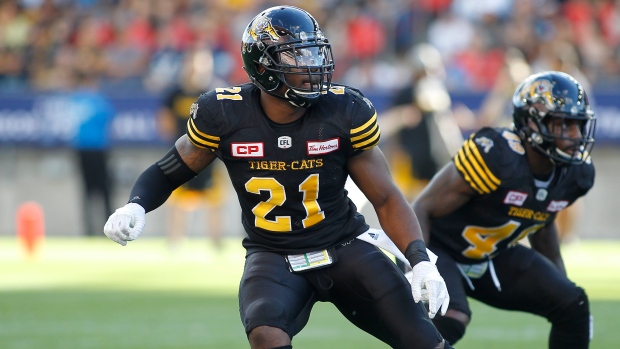 Simoni Lawrence has been active on social media during this extended CFL off-season.

The Hamilton Tiger-Cats star linebacker has opened up about his personal journey of growth and managing his mental health and said it’s been a difficult process at times.

“It was a tough journey,” Lawrence told TSN’s Matthew Scianitti. “I had a lot of help from my mother and my father, a lot of help from God, too. It’s still something that’s hard to talk about but I just want to make sure people are aware that mental health is real and sometimes you just need to give yourself a break and help others when you’re able to help yourself.”

Lawrence said he uses social media to connect to fans and the community and do his part to try and help them through difficult times as well. The 31-year-old, who is known for trash-talking and having a lot of fun on the field in Hamilton, said it’s only fair fans see the other side of him as well.

“I feel like it’s something that’s big, especially trying to give back to the community. I’m always vocal about having fun and when I have a trying time in my life I feel like I owe the fans that grew up watching me, just to teach them and coach them on anything that I experience just so they won’t have to go through it, or other players won’t have to feel alone because I feel like a lot of players probably go through the same emotions.”

Lawrence has been in Hamilton the past seven seasons and is one of the team leaders on defence. He said he’s been talking to his Tiger-Cats teammates and helping them stay prepared if they get back to playing football after the COVID-19 pandemic postponed the start of CFL training camps indefinitely last month.

“I feel like it’s all about communication. I try to tell people what I know or what I think is going to happen. I was talking to (Ticats DB Cariel) Brooks the other day and I told him, ‘just hang in there we have to be in the best shape, even if it’s half a season.’ We just want to make sure that we’re in the Grey Cup.”

As for himself, Lawrence said he’ll be ready to go if and when it’s safe to play football again this season, and that he can switch into football mode just like that.

“That’s something I take pride in, just being able to separate my life. During the season it’s about winning football games and that’s in any kind of way, shape, or form. When we’re playing football, we’re playing for everybody’s families and things like that. During the off-season that’s my time to relax, calm down, get myself together, and prepare for another season.”