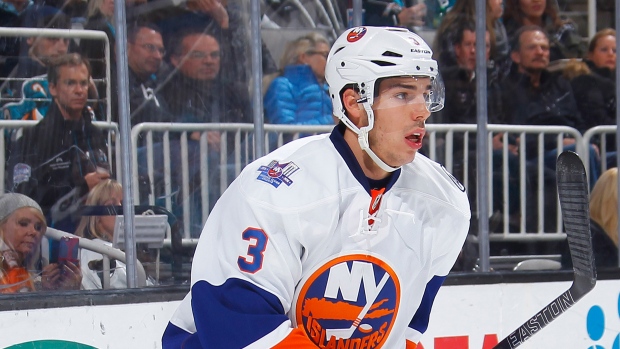 Addressing the media for the first time since news of his trade request became public, New York Islanders defenceman Travis Hamonic said the root of his request is a family matter he holds dear to his heart.

Hamonic, the youngest of four children, lost his father suddenly at the age of 10 and runs a "D-partner of the Game" with the Islanders to host a child who has lost one or both parents at every Islanders home game.

TSN Hockey Insider Darren Dreger reported Wednesday the native of St. Malo, MB requested to be moved to Western Canada prior to the 2015-16 season.

"I think the Islanders have been great with me throughout this whole process," Hamonic said. "Honestly, I know people are going to say and write what they want, it has nothing to do with the organization or how I’ve been treated here for six years of playing and another two or three since I was drafted. I’ve honestly been treated like gold from the start.”

Hamonic thanked Islanders general manager Garth Snow, head coach Jack Capuano and owner Charles Wang for their roles since he made the request.

“When [Snow and I] talked about this, it was more on a personal level than just a player-GM thing,” Hamonic told members of the media Thursday. “He understands what this means for me and how difficult it is. He’s really been there for me and I couldn’t thank him enough.”

The 25-year-old said he has not allowed his personal situation to affect his play.

“I’ve been playing for the past couple of months and there hasn’t been an issue for me,” the 2008 second-round pick said. “I’m still a teammate and someone who wants to play hard and wants to win. That’s not going to get lost in this process whatsoever. I’m going to go out there and play as hard as I can till I’m told otherwise.

Capuano backed Hamonic's sentiment and praised his professionalism throughout the process.

“You can see the professionalism in him and what a teammate that he’s been and what a first-class individual he’s been,” Capuano said. “I’ve known for a while and it hasn’t affected his game. If anything, he’s played better.”

In 19 games this season, Hamonic has three assists and a plus-five rating while averaging 23:20 in ice time per game. He scored five goals and 28 points in 71 games last season.

According to Dreger, the Islanders are looking for an equitable player in return for the top-two defenceman, making for difficult negotiations.