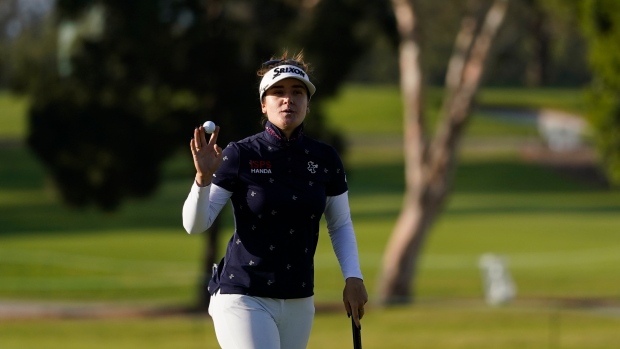 PALOS VERDES ESTATES, Calif. (AP) — Hannah Green held onto the lead Saturday in the Palos Verdes Championship after a frustrating start on the hilly, windswept course perched above the Pacific Ocean.

Three strokes ahead of Lydia Ko and three other players entering the day, Green overcame bogeys on the first two holes to shoot a 1-over 72 and take a one-shot lead over playing partner Ko into the final round.

“I got off to a horrendous start, I guess you could say,” Green said. “Just short-sided myself too many times today, so I was actually pretty happy with the 1-over score. Just hit a couple of funny wedge shots and also didn’t read the lies and the wind direction.”

Green closed the back nine bogey-eagle-bogey-birdie and also dropped a stroke on the par-4 12th. The Australian birdied the par-5 16th and parred the last two to finish at 8-under 205 in the first-year event that wraps up the LPGA Tour’s two-week, Los Angeles-area stay.

“I think I made it a little harder than it was,” Ko said. “But considering how I started, to finish under par for the day, upwards and onwards.”

“It was really windy,” Ko said. “I think there is a huge difference between playing in the morning and the afternoon. Luckily, in the last few holes the wind died down, so made it a little bit easier.”

Ranked third in the world, Ko won the Gainbridge LPGA at Boca Rio in January for her 17th LPGA Tour title.

Green won both of her LPGA Tour titles in 2019, taking the major KPMG Women’s PGA at Hazeltine and the Portland Classic. She was second behind Nasa Hataoka a week ago in the LA Open at Whilshire Country Club.

Lexi Thompson jumped from a tie for 37th to a tie for third at 5 under with a 66, teeing off more than 2 1/2 hours before Green and Ko in the final group. She’s making her first start since tying for fourth four weeks ago at Mission Hills in the first major championship of the year.

“The first two days were a little bit rough with the ball-striking, but came together today,” Thompson said. “Had a good range session yesterday after my round and figured out a few things. Just felt confident coming into today.”

Lone Canadian who made the cut Maude-Aime Leblanc of Sherbrooke, Que., shot a 72. She enters Sunday four strokes back of the lead in a tie for 12th.

Inbee Park chipped in for eagle on 16 for a share of the lead with at 7 under, then bogeyed the final two holes.

Top-ranked Jin Young Ko was 4 under after a 73.

Anna Davis, the Augusta National Women’s Amateur winner, was 2 over after a 72 in her first LPGA Tour start. The 16-year-old is from Spring Valley east of San Diego. She received a sponsor exemption.

“To be able to play in on the weekend in an LPGA Tour event, it’s pretty good experience,” Davis said. “Looking forward to many more for sure.”