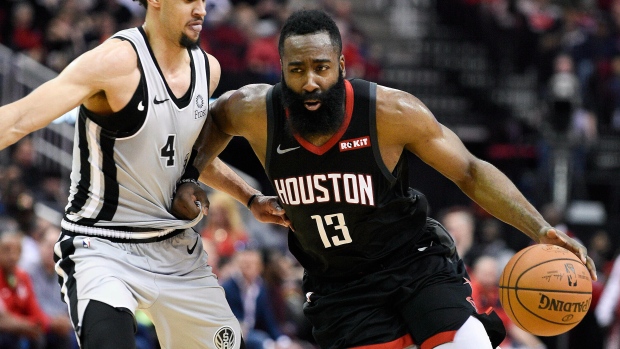 HOUSTON — After James Harden scored 61 more points Friday night to match his career high, Mike D'Antoni was asked the question just about everyone in the NBA is wondering this season.

Who can defend the league's most unstoppable scorer?

Harden scored 27 points in the first quarter and went on a late scoring run to help the Rockets pull out a 111-105 victory over the San Antonio Spurs.

The Rockets trailed 100-94 with 4 minutes remaining when they went on a 13-2 run to regain the lead. In that stretch, Harden hit three straight 3-pointers and two tough jumpers to score all of Houston's points. He said his mindset was simple.

"Be aggressive," Harden said. "We were down so we had to make shots and get stops."

Harden topped the 50-point mark for the eighth time this season, compared with 10 such performances from the rest of the league combined. He matched his career-best total set earlier this season against the Knicks at Madison Square Garden.

The NBA's leading scorer surpassed the 30-point mark in the second quarter and the 40-point mark with 9 minutes remaining in the third.

"I just knew how important this game was," Harden said. "This was an opportunity for us to take care of our home so I wanted to come out with some aggressiveness."

Before Harden's late surge, the Spurs had overcome a 15-point halftime deficit to tie the game at 81 entering the fourth quarter.

"I was looking for someplace to throw up," D'Antoni said. "I felt awful. You knew they were going to turn it around . They churned us up and started making shots, but James wouldn't let us lose."

Harden was 7 of 10 from the field in the first quarter, including 3 of 4 from the 3-point line, and also went 10 for 12 from the free throw line. His 27 points in the period were the second-most in franchise history, trailing only Vernon Maxwell's 30 in 1991.

"You've got to appreciate it," Rockets point guard Chris Paul said of Harden's run this season. "What he's doing, that ain't easy. I don't care who you are."

DeRozan said Harden is arguably the greatest isolation scorer in the history of the game.

"He's been in the zone all year with the things he's been doing," DeRozan said. "He's been remarkable. You've got to tip your hats to him. When a guy gets going like that, it's tough to slow him down."

"We gave up a million points in the first quarter, they had 19 free throws in the first half and none in the third quarter," Spurs coach Gregg Popovich said. "You play with your heart but you play between the ears, also, so we played smarter and harder in the second half, but you can't do that against a good team like Houston or any team in the NBA.

"You've got to play for 48 minutes. We played the last two quarters and at the end, James put on an MVP-type performance so that's that."

Harden's 61 points were the most ever scored individually against a Popovich-coached team.

Spurs: Davis Bertans' recent struggles from beyond the arc continued. Bertans entered March shooting 46.9 per cent from 3 on the season but after going 1 for 10 on Friday is shooting 30.3 per cent this month. ... The Spurs outscored the Rockets 56-36 in the paint.

Rockets: Houston has won six of the past eight games against San Antonio after losing nine of the previous 11 meetings. ... PF Kenneth Faried (knee soreness) missed a second straight game despite coach Mike D'Antoni saying before the game that he had been cleared to play.

Rockets forward P.J. Tucker went scoreless and 0 for 3 from the 3-point line but had 10 rebounds, two assists and two blocks. He was frequently tasked with guarding Spurs power forward LaMarcus Aldridge, his former teammate at Texas, who scored 10 points on 5-of-13 shooting.

The Toyota Center crowd cheered loudly when the Rockets announced an 84-55 win for the University of Houston men's basketball team over Georgia State in the first round of the NCAA Tournament. Rockets owner Tilman Fertitta, a Houston alum who helped fund a renovated arena for Houston in 2016 at the renamed Fertitta Center, sat courtside at the Rockets game.