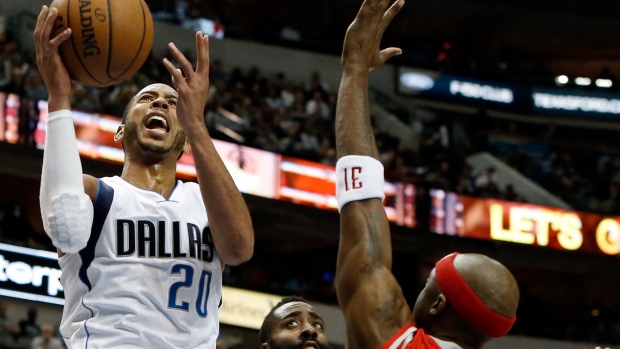 DALLAS - With Dirk Nowitzki and Chandler Parsons doing an injury shuttle and Rajon Rondo still easing back in after missing six games, Devin Harris and Al-Farouq Aminu stepped in for Dallas.

Harris scored 17 points, Aminu set season highs with 17 points and 12 rebounds, and the Mavericks held on to beat the Houston Rockets 111-100 Friday night.

"Farouq was tremendous," Dallas coach Rick Carlisle said. "He gives us a presence on the boards. He can guard a lot of positions. He's having a lot of things to process, but he's doing a terrific job."

Rondo scored 13 points in 20 minutes during his second game back from a broken bone near his left eye as the Mavericks bounced back a night after a blowout loss at Oklahoma City in their return from the All-Star break.

James Harden had 26 points to lead the Rockets, who were playing for the first time in nine days and warmed up from 3-point range to cut a 20-point, fourth-quarter deficit to five before falling short.

"We were kind of a little rusty in the first half from the break," Harden said. "We needed a half to kind of get the rust off a little bit. The second half, we started playing a little bit better."

The Mavericks extended a franchise record by having eight players in double figures for the fourth time this season.

Parsons, playing his former team in Dallas for the first time in the regular season after losing to the Rockets twice in Houston, scored 13 points before leaving with a sprained left ankle. Nowitzki had 12, and Tyson Chandler added 10 points and 14 rebounds.

Just as Parsons was trying to return after getting hurt when he was pushed hard by Josh Smith on a foul, Nowitzki went out after injuring his right elbow when he hacked Harden on a drive.

When the 7-foot German returned, Parsons limped back to the locker room, this time for good. Parsons said X-rays were negative and an MRI was planned for Saturday. He was in a walking boot after the game.

With all that going on, Aminu was on his way to his best game since signing as a free agent from New Orleans last off-season. Dallas' lead was down to five with less than 5 minutes to go when the rangy forward grabbed a loose ball and got a dunk after Charlie Villanueva stripped Harden following a defensive rebound.

Monta Ellis had a driving layup to start a game-clinching 10-2 run and finished with 12 points after struggling for two games following a hip injury. Villanueva made all three of his 3-pointers and finished with 13 points, including a couple of big baskets to help Dallas hold on.

Trevor Ariza hit three 3-pointers in the fourth quarter and finished with 16 points, and Josh Smith had 15 for Houston.

Carlisle said on his radio show that Amare Stoudemire was dealing with conditioning issues, but the coach wouldn't elaborate in his pregame comments. Stoudemire missed his first two games in Dallas and is still expected to make his debut Sunday against Charlotte. The 32-year-old signed after taking a buyout from the last-place Knicks. "He's not unhealthy," Carlisle said.

The Rockets went up 8-0 before getting sloppy and finishing the first quarter with nine of their 21 turnovers — two off their season high. Harden had six turnovers to go with seven rebounds and five assists. Smith had five turnovers. "I think we were too amped up in the beginning, especially that second unit," Smith said.

Rockets: C Dwight Howard made the trip even though he's still at least two weeks from returning. He's been out with swelling in his right knee. ... G Pablo Prigioni and G/F K.J. McDaniels passed their physicals in Houston and should be in uniform at home against Toronto on Saturday night. Both were obtained in deals at Thursday's trade deadline, Prigioni from the Knicks and McDaniels from the 76ers.

Mavericks: Harris also had six rebounds and seven assists off a bench that contributed 51 points, 24 rebounds, 14 assists and Dallas' two blocks, both by Aminu. ... Chandler had his 25th double-double. The Mavericks are 17-8 in those games.

The Rockets host Toronto on Saturday to start five-game homestand, matching their longest of the season.

The Mavericks play at home against Charlotte on Sunday.