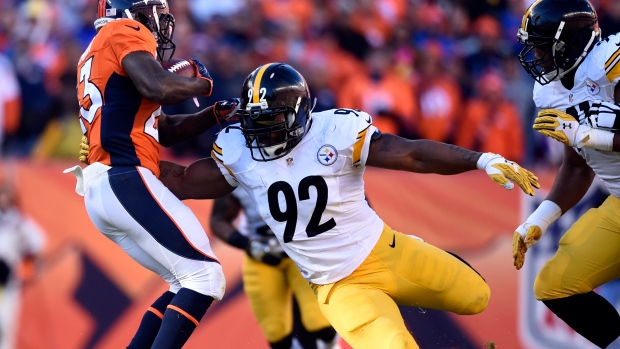 The five-time Pro Bowl linebacker announced on his verified Instagram Monday that he plans on returning to the Pittsburgh Steelers in 2016. Harrison posted a picture of his familiar No. 92 jersey emerging from a smoke-filled tunnel with a caption that read: "I'm back."

"I'll be 38 on Wednesday and I'm feeling just like a fine wine. Getting better with age," Harrison wrote.

Harrison finished with five sacks in 2015, but said after Pittsburgh's loss to Denver in the playoffs that he needed time to figure out if he wanted to come back for a 14th season. Harrison has one year left on his contract. As he typically does, Harrison has spent much of the off-season working out in Arizona.

Steelers coach Mike Tomlin said over the weekend the team anticipated having Harrison in the fold. Pittsburgh initially planned on limiting Harrison's snaps last fall, but he proved so effective he was typically among the leaders among the linebackers in snaps played. The Steelers added depth at linebacker during the off-season, picking up inside linebacker Steve Johnson from Denver in free agency, and drafting outside linebacker Travis Feeney from Washington in the sixth round and inside linebacker Tyler Matakevich from Temple in the seventh.

Harrison worked as part of a rotation with Jarvis Jones, Bud Dupree and Arthur Moats last season and at times showed flashes of the brilliance that made him one of the NFL's best players during his prime.

Harrison isn't the only player back for more. The team announced Monday it re-signed veteran backup quarterback Gradkowski to a one-year deal.

Gradkowski missed all 2015 after injuring his right hand during the preseason, leading the Steelers to bring in Mike Vick. Pittsburgh made no attempt to bring back Vick and instead will have Gradkowski battle Landry Jones for the No. 2 spot behind Ben Roethlisberger. Jones played erratically while filling in last season while Roethlisberger nursed various injuries.