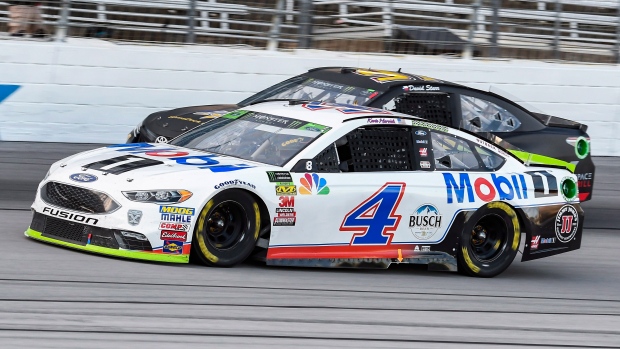 AVONDALE, Ariz. — The mood in the desert is tense headed into the final elimination race before NASCAR's championship, a title Kevin Harvick is determined to win.

The 2014 champion is on a mission to lead his Stewart-Haas Racing team into the title race, prove they honestly are the best group in the garage and that a wave of adversity cannot unravel their success . NASCAR said the No. 4 team cheated in last weekend's victory at Texas by building their own spoiler and passing it off as one supplied by the required vendor. The punishment was severe and put Harvick in danger of not qualifying for the championship.

But the road to the final four goes through ISM Raceway outside of Phoenix. It's a track where Harvick has won nine times previously, including this year — a week after a different No. 4 Ford was found to be illegal following a victory. This track was critical in Harvick's run to his first title four years ago when he had to win, and did, at Phoenix to advance to the championship round.

A win isn't required Sunday, and Harvick needs only to avoid any on-track issues to secure his ticket at Homestead-Miami Speedway.

Only a quiet Sunday drive is not Harvick's style.

He arrived in Phoenix without his crew chief and car chief, both suspended for the final two races of the season . The berth he'd earned into the final four by winning last week at Texas had been stripped away as punishment by NASCAR. His team has been branded a cheat.

The situation is less than ideal, and Harvick is disinterested in discussing the penalty or the plight of his race team. He's instead letting his performance speak for itself.

He went out and won the pole .

Then he was fastest in both of Saturday's practices.

It's quite clear Harvick came to Arizona with every intention of rolling over the competition on his way to Homestead. The penalty is old news to him and he's not looking back.

He's one of seven drivers racing Sunday for three remaining spots in the finale. Only Joey Logano is locked in — and it is no coincidence he's the most relaxed playoff driver right now — and all three of Harvick's teammates are vying for slots. The penalty issued Wednesday against Harvick not only cost him his automatic berth to Homestead but the points deduction left him only three points above the cutline.

Lurking right behind him is teammate Kurt Busch, who recognized the opportunity Harvick's penalty opened for the last driver to win the Cup title in a Ford.

"This week with the penalty, it's like we won two stages without even firing up the engine on our car," said Busch, champion in 2004 in the first year of NASCAR's playoff system. "Now we're equal and the job now is to get stage one, stage two and to see how things pan out for the end of the race. We know our job is going to be tough, but we just have to go after it."

While Harvick was laying the groundwork for a rout on Sunday, his competition was preparing for an intense push for those final three berths. Among the drivers who haven't qualified for Homestead are Kyle Busch and reigning series champion Martin Truex Jr., who stood by his car and watched as it took his team four tries to pass pre-qualifying inspection. Kyle Busch, Truex and Harvick were NASCAR's so-called Big Three this year as they dominated the regular season yet none are guaranteed to race for the title.

So it left Logano as the only relaxed driver and feeling mighty confident about his title chances.

"When the playoffs started, I kind of felt like we were an underdog," Logano said. "The last six or seven weeks we've led a lot more laps, we've won a lot of stages, won a race, was fast at Kansas, was fast at Texas and you know what? I think we're the favourite now to win."

Logano bumped Truex out of his way in the final turn at Martinsville Speedway two weeks ago to win the race and earn the automatic berth. Locking in allowed Logano to take a singular focus on Homestead.

"We're focused in on one race for the last two weeks, and other teams really have to focus in on getting there first," Logano said. "Instead of working on just one car, they had to work on three cars to get in and then another one on top of that for Miami."