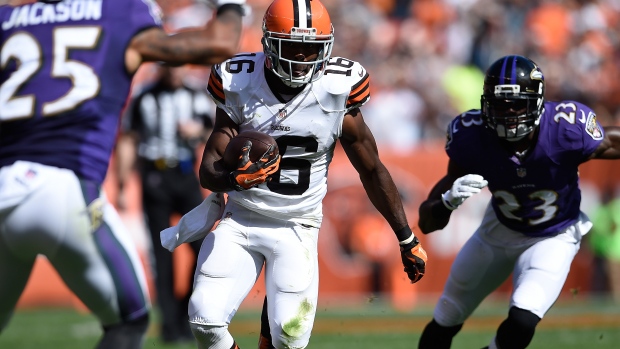 BEREA, Ohio - Andrew Hawkins is one of the smallest players on the Browns' roster, but he's made one of the biggest impressions so far this season.

Through Cleveland's first three games, the 5-foot-7, 180-pound Hawkins leads the team in receiving with 21 catches for 244 yards.

"It's early still, we still have a lot of work to do, but I'm very blessed," Hawkins said Thursday as he and his teammates were packing up to enjoy their bye week.

The Browns signed the 28-year-old Hawkins to an offer sheet in March, and when the Bengals chose not to exercise first-refusal rights on the restricted free agent, Cleveland landed the receiver, who actually began his career with the Browns as a tryout player at the team's 2008 rookie minicamp.

Hawkins also spent two years (2009-10) in the CFL with the Montreal Alouettes and current Bears coach Marc Trestman, along with appearing on Michael Irvin's reality TV show, "4th and Long," in 2009.

"Coming from where I came from, being on the couch praying just for an opportunity to be on the practice squad, and that taking years to get accomplished," Hawkins said. "I'm always in awe, just being in this situation, I always have to pinch myself because there's times I didn't think this would be possible."

So far, he's certainly taking advantage of the situation. Hawkins has developed chemistry on the field with quarterback Brian Hoyer, as he is averaging seven catches a game.

And while he has naturally played a lot of the slot position in his four years in the NFL, the Browns have him lining up all over the place, including the outside.

"His ability to beat man-to-man coverage, that's all it takes to play on the outside," wide receivers coach Mike McDaniel said. "He has the speed to do that. I wouldn't say it's surprised me. He's lived up to my expectations since he's been in-house."

Hawkins does display a surprising amount of physicality for a player of his size.

"He'll give you everything he has," McDaniel said. "I'm sure if you asked DBs that he's played against, you go through warmups and you see a smaller stature. You're just not expecting that feistiness. He is a football player."

"He's not just a slot, skill, finesse player. He's played defence. He's played offence. He's not afraid of the physicality and will do whatever it takes to make both him and his team successful."

Hawkins' surprising start has been exactly what the Browns were hoping for, as they have had to contend with the suspension of Josh Gordon. Though he has enjoyed a featured role in Gordon's absence, Hawkins is looking forward to having the league's leading receiver from last season back on the field with him.

"Josh is an incredible receiver, one of the best receivers in this league," Hawkins said. "If I had my choice, he'd be here with me right now. He's that much of a difference-maker. Honestly, I can't wait to have Josh back, that's all I know."

Three games is a small sample size for anyone, Hawkins knows that. But he'll be doing everything he can to try and sustain his success as the season continues.

"All I kind of focus on is myself, and what I can control," Hawkins said. "I feel like it's my duty to give everything I have. I think it's just a matter of kind of my journey to get here. It was a very tough road and I don't take anything for granted."

NOTES: Coach Mike Pettine had a message for his players before the team went into the bye week. "They represent not just themselves, but their families and the Cleveland Browns when they're out of the building. I just keep stressing it to them. Surround yourself with good people. Make good choices. It's a good group, and I think that the time off will be well spent." . QB Brian Hoyer and DB Jim Leonhard got work at the holder position in practice Thursday as part of a normal routine. . LB Craig Robertson (birth of a child) and QB Connor Shaw (illness) returned to practice.