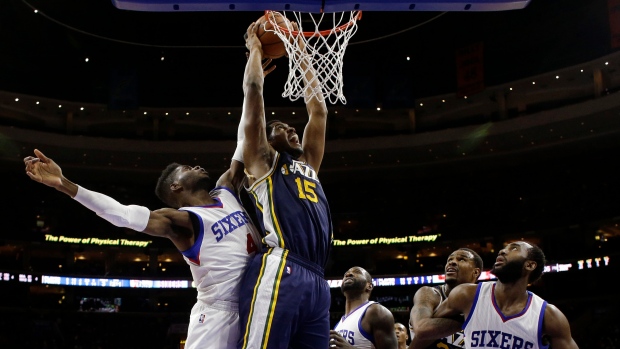 NEW YORK, N.Y. - A nearly perfect road trip proved the Utah Jazz are a team on the rise.

Gordon Hayward scored 24 points, including five straight to stop a Nets rally, and the Jazz beat Brooklyn 95-88 on Sunday night.

Former Nets forward Derrick Favors added 22 points and eight rebounds for the Jazz, who won for the seventh time in nine games and finished off a 3-1 road trip in which they were a second away from being undefeated.

"I told the guys, I feel like every time we've gone on a road trip we've gotten a little better. And I thought this was the case these last four games and I thought we improved while we were gone," Utah coach Quin Snyder said.

Hayward's flurry started a 10-0 run after the Nets were within a point midway through the fourth quarter. Pleased with the trip, he also couldn't forget the one that got away, an 85-84 loss in Boston last Wednesday on Tyler Zeller's buzzer-beater.

"For a young team like this, I think having those experiences of being in that Boston game, playing in Memphis on the road, things like that and getting a win, it really helps us for the future," Hayward said. "Gives us confidence that we can come east and go 3-1, and we can do even better than that and go 4-0."

Brook Lopez had 19 points and 10 rebounds in his return to the Nets' starting lineup. Thaddeus Young also was inserted into the lineup to make his first start since being acquired from Minnesota for Kevin Garnett at the trade deadline. He also scored 19.

The Nets dropped their third straight, falling 2 1/2 games back in the race for one of the final Eastern Conference playoff spots.

"Right now it's just we're in a tough situation where we're fighting for a playoff spot and we're playing really badly. It's like we take one step forward and two steps back," guard Deron Williams said.

Coach Lionel Hollins gave little insight into his reasoning for the new lineup, saying it was time for a change. The Nets had been going with 6-foot-7 Joe Johnson as an undersized power forward, and his offence has suffered.

It didn't help him much Sunday, as he finished with nine points on 4-of-10 shooting. Former Jazz All-Star Williams, acquired in the 2011 trade that sent Favours to Utah, had just six points and four assists, two nights after going 2 for 16 in an overtime loss to Phoenix.

Neither team led by more than seven through three quarters, and Utah's lead was 78-77 with 5:23 left after six straight points by Lopez. Hayward then nailed a 3-pointer and followed with two free throws that made it 83-77, and Favours and Elijah Millsap combined for the next five points as Utah opened its largest lead at 88-77 with 3:20 to play.

The Nets faltered again in the closing stretch, just as they did while blowing a 15-point, fourth-quarter lead and losing to the Suns in overtime.

They fell to 1-3 on a five-game homestand that ends Tuesday against New Orleans.

The Jazz (26-36) surpassed last season's victory total and improved to 7-3 with the lineup of Hayward, Favours, Rudy Gobert, Exum and Joe Ingles. "I think we're beginning to have an identity," Snyder said. "Doesn't mean we're a good team yet. Getting better. But I think we're starting to find out who we are and how we need to play to be a good team."