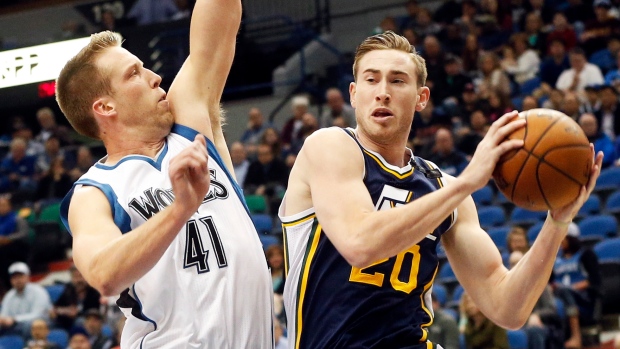 MINNEAPOLIS - It didn't take very long for Rudy Gobert to exact his revenge after getting dunked on by the NBA's top rookie.

Gobert had 15 points, 12 rebounds and three blocked shots, including an impressive stop on Andrew Wiggins in the second quarter, and the Utah Jazz beat the short-handed Minnesota Timberwolves 104-84 on Monday night.

Gordon Hayward scored 22 points for Utah, which earned its second straight win after a four-game losing streak. Reserve Trey Burke had 19, and Trevor Booker finished with 17 points and 13 rebounds.

A week ago, the Timberwolves beat the Jazz in Utah despite dressing only seven players.

"We needed some revenge," Booker said.

The most exciting stretch of the game came when Wiggins and Gobert squared off in the second quarter.

With 4:52 left, Wiggins threw down a one-handed dunk over the 7-foot-1 Gobert, one of the NBA's leading shot blockers. Wiggins yelled and pumped his fist as Utah called timeout.

"I haven't made a dunk like that all year, so that's the first time you've seen it," Wiggins said of his emotional display.

The big man from France then stepped up when Wiggins tried to dunk on him again 34 seconds later. This time, it was Gobert pumping his fists and yelling after he rejected Wiggins' slam attempt and sent the rookie tumbling to the floor.

"The most important thing is to never be scared," Gobert said. "I was waiting for him to come back and he came back pretty quick."

"He's willing to stick his nose in there and doesn't have an ego about getting dunked on," Snyder said. "Hopefully they'll have a poster in every town we're in because there's probably two or three of them of him blocking a shot, too."

Minnesota was again without Ricky Rubio, Kevin Garnett, Kevin Martin and Nikola Pekovic due to an injury or illness. It used its 27th different starting lineup of the season, a franchise record.

The Jazz grabbed control with a 14-0 run at the start of the second half.

"Those guys in there, they're exhausted," Timberwolves coach Flip Saunders said. "I'm not using that as an excuse, it's just the reality of the situation."

For the Jazz, Derrick Favours missed his second straight game with back spasms.

Burke was drafted ninth overall by Minnesota in 2013, and then immediately dealt to Utah. In eight career games against the Wolves, Burke is averaging 19 points.

He was impressed with Gobert's block on Wiggins in the second quarter.

"It fired us all up. We know what type of shot blocker he is," Burke said. "It kind of fueled our defence."

Jazz: Hayward has scored 20 or more points 36 times this season after doing it 22 times in 2013-14. ... Booker notched his second double-double of the season. It was the 21st for Gobert. . F Rodney Hood left in the second quarter after getting hit in the head.

Timberwolves: C Gorgui Dieng missed the game due to concussion symptoms. ... Wiggins is the only player on Minnesota's roster from the start of the season to not miss a game because of injury.

Saunders said before the game that Pekovic's ankle injury will keep him out for the rest of the season. Since signing a five-year, $60 million contract in August 2013, Pekovic has played in just 85 games.

Favors tested his injured back during pregame warmups, but ended up missing his second straight game.

"Backs are tricky things," Snyder said. "You always wonder if there's going to be something that makes it worse or aggravates it."