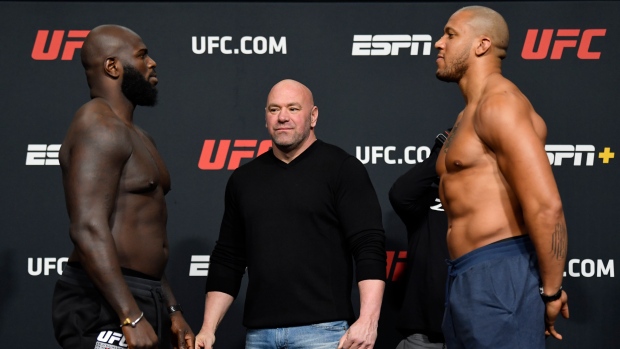 For the second week in a row, heavyweights will headline in Las Vegas Saturday as Jairzinho Rozenstruik faces Ciryl Gane in the main event of UFC Fight Night. Derrick Lewis punctuated last weekend’s card with a vicious knockout victory, both Rozenstruik and Gane have the resume to suggest the same could happen again this weekend.

Rozenstruik enters the fight on the heels of a huge TKO finish of former UFC heavyweight champion Junior dos Santos.

The 32-year-old holds a 5-1 record since joining the UFC with all five victories coming by way of KO or TKO via strikes. In addition to dos Santos, he has also stopped former champion Andrei Arlovski and veteran Alistair Overeem during his six fights in the promotion.

Including his only UFC loss, a KO defeat at the hands of No. 1 contender Francis Ngannou, Rozenstruik has only gone past the second round once in the promotion, his last second KO win over Overeem.

Gane is a rising heavyweight contender that has yet to suffer a defeat in his seven-fight professional MMA career.

The 30-year-old has won all four of his fights in the UFC, including a TKO of dos Santos in his last outing.

Two of his first three professional victories were via TKO, but he has also earned submission wins over Raphael Pessoa and Don'Tale Mayes in the UFC.

Rozenstruik is the fourth-ranked contender and Gane is seventh, so a victory will be key for either man inserting themselves into the very crowded heavyweight title picture.

Canadian Alexis Davis makes her return to action in her first bout since July of 2019 as she faces Sabina Mazo in the bantamweight division.

The Port Colborne, Ont., native has lost her last three fights, including a unanimous decision to Viviane Araujo the last time she was in the Octagon at UFC 240.

The 36-year-old is a former bantamweight title challenger who fought then-champion Ronda Rousey for the gold at UFC 175.

Mazo is looking for her fourth victory in a row as she takes on the Canadian. She has victories over Shana Dobson, JJ Aldrich and most recently Justine Kish last September.

The Medellin, Colombia native is 9-1 in her professional career, including a 3-1 mark since joining the UFC.

Pedro Munhoz will face Jimmie Rivera and Nikita Krylov will battle Magomed Ankalaev in the co-main event at the UFC Apex.