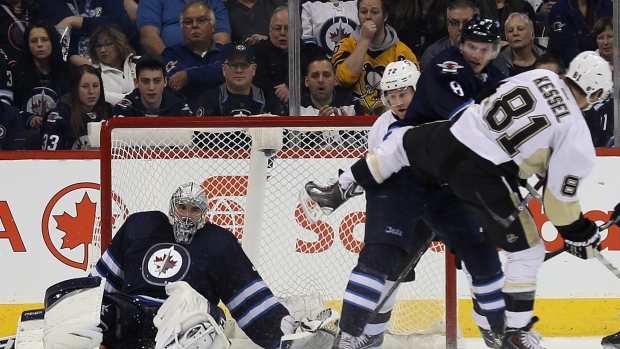 WINNIPEG - Connor Hellebuyck sounded more relieved than excited about his first shutout, even if it was only his ninth career NHL game.

Winnipeg's rookie netminder made 30 saves and Bryan Little scored on a penalty shot as the Jets defeated the Pittsburgh Penguins 1-0 on Sunday.

Hellebuyck even downplayed blanking a team with the likes of stars such as Sidney Crosby, Evgeni Malkin and Phil Kessel.

"I think every team's good in this league and I'm just really excited I finally got this milestone," Hellebuyck said.

Jets head coach Paul Maurice smiled at his 22-year-old goalie's use of the word "finally."

Hellebuyck, who is now 6-3-0 with a 2.13 goals-against average and .926 save percentage, was called up from the American Hockey League's Manitoba Moose to join goalie Michael Hutchinson after starter Ondrej Pavelec suffered a knee injury Nov. 21. He's expected to be out until at least late January.

The shutout was Winnipeg's first of the season and stopped the team's (16-17-2) two-game losing skid.

Penguins goalie Jeff Zatkoff made 27 stops in his eighth game this season.

Hellebuyck said he goes into every game expecting a shutout, but added with a laugh he was thankful for the help he got from one of his teammates.

"I definitely have been wanting this milestone to come because it means I essentially played a perfect game," he said. "And tonight, with the help of Tyler Myers, I think finally I achieved it."

With just under a minute left in the game, Myers dove in Hellebuyck's crease to stop shots from Penguins Chris Kunitz and Nick Bonino with his face.

"I don't usually come after a game and talk about a save that you made as a defenceman, so it's a desperation play," said Myers, who wasn't hurt. "They got the puck to the net and, fortunately, I was able to get a face on it."

Hellebuyck even went up to Meyers on the bench to say "thank you" and compliment him on the save.

Little's penalty shot was the first of his career and was awarded after he was pulled down on the way to the net by defenceman Ben Lovejoy.

He made Lovejoy pay for the play as he put his shot over Zatkoff's glove into the upper corner at 14:46 of the opening period.

"I didn't know a lot about this goalie, but I knew I was going to shoot glove side pretty much before I went," Little said. "I was either going to go low or high, but I saw definitely more up around his glove was open than low."

"Credit him, he made a great shot," Zatkoff said. "He made a little move and shot it right when I dropped my glove a little bit."

The Penguins had won their last two games, including 3-1 the night before in Minnesota.

Crosby said the back-to-back action was no excuse.

"We had a good (Christmas) break," he said. "We should be well-rested. They jumped on us early and we got on our heels a bit. A better start definitely would have helped us."

Notes: The Jets put centre Mark Scheifele on injured reserve Sunday for at least seven days because of a concussion he suffered in a collision with Andrew Ladd at Saturday's practice. Adam Lowry was called up from the Moose …The Penguins sat defenceman Kris Letang for precautionary reasons after he was hit in the head in Saturday's win over Minnesota.