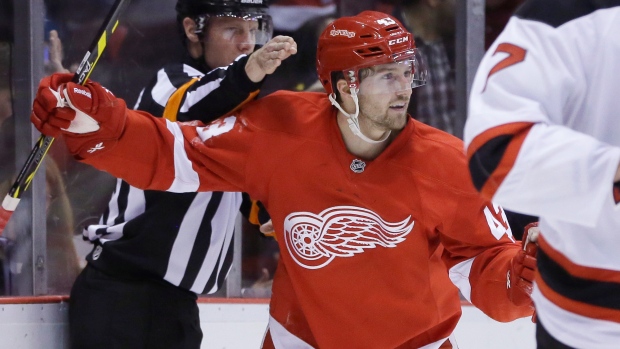 Helm's unassisted tally with 4:25 left gave the Red Wings a two-goal cushion. Henrik Zetterberg had scored the go-ahead goal 1:24 earlier for Detroit, which got 12 saves from Jimmy Howard.

Cory Schneider made 25 saves for the Devils, whose lone goal was scored by Joe Whitney. He gave New Jersey a 1-0 lead with 4:23 remaining in the second period.

The victory helped the Red Wings shake memories of Monday's 5-2 loss in Boston.

"He was good," coach Mike Babcock said of Helm. "I didn't think his line was any good at all in Boston.

"It was great to see they bounced back and were that solid. All of them had a good night."

Howard faced 44 shots in Monday's loss but he had a much easier time two days later after Detroit outshot the Devils 11-1 in the third period.

The 13 shots were the fewest Detroit has allowed this season.

"We didn't give them much room," forward Gustav Nyquist said. "I thought we tracked them hard. They didn't spend much time in our zone."

The Devils saw it differently.

"We gave ourselves a chance going into the third, and some mental lapses cost us," Whitney said.

Whitney began the scoring off a takeaway. His shot went in over Howard's left shoulder. Helm tied it 2:19 later with a wraparound goal.

Devils forward Steve Bernier was helped off the ice late in the game after being checked at centre ice by Brendan Smith. New Jersey general manager Lou Lamoriello, who is also serving as a coach, said Bernier will undergo X-rays. He added that he feared the injury could be serious.

A New Year's Eve game had been a Detroit tradition, but the Red Wings hosted one for the first time since 2011. They couldn't do it last year because they hosted Toronto in the outdoor Winter Classic the following day.