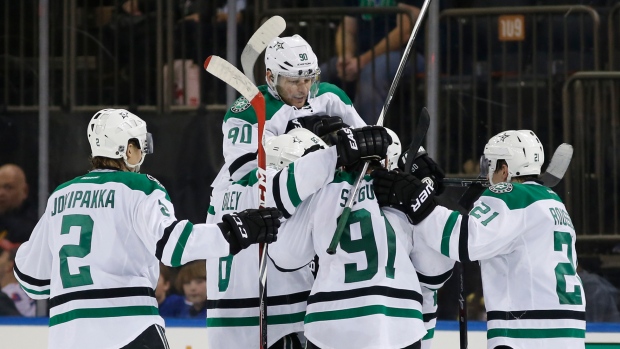 NEW YORK -- The Dallas Stars are fighting to stay in the playoff race. They got a little help Sunday with Rangers star goaltender Henrik Lundqvist out with an injury.

Ales Hemsky scored 1:02 into overtime as Dallas overcame a late tying goal by Chris Kreider to snap a three-game skid with a 3-2 win over New York.

Hemsky snapped the puck past fill-in goaltender Cam Talbot for his ninth goal of the season to lift the Stars after being outshot by the Rangers 20-2 in the third period.

"There were a lot of bodies in front of the net so I just took a shot and it went in. I'm happy about that," said Hemsky, 31, who joined the Stars this season after spending nearly his entire NHL career with Edmonton. "If you want to make the playoffs, you need every point. Today we had a break. Hopefully we can keep going."

Jason Spezza and Erik Cole each scored second-period goals for Dallas. Spezza opened the scoring on a 5-on-3 power play for the Stars at 2:53 of the second period with his 10th goal of the season. Tyler Seguin and John Klingberg assisted.

Carl Hagelin scored for New York at 15:27 of the second, putting a pass from Kevin Hayes past Dallas netminder Kari Lehtonen, who made 34 saves. The goal was the 11th for Hagelin. Defenceman Kevin Klein also assisted.

"It really was a huge relief to win it quick in overtime," said Lehtonen. "You do your best and try not to think too much. It was a big win."

With the victory, the Stars (24-21-8) moved within five points of Calgary and Vancouver for a playoff spot.

"I think it helps you believe again because we have had some tough stuff happen to us," Stars coach Lindy Ruff said. "But to win in overtime, that helps us."

Cole put the Stars ahead 2-1 at 18:05 of the second with his 14th goal when he finished off a passing play with Hemsky with shot that slipped past Talbot, who was making his third straight start in place of the injured Henrik Lundqvist. On the winning goal, Talbot said he lost sight of the puck when Hemsky shot it.

"I didn't see it," Talbot said. "I looked around to see the initial start and then he went straight back in the other direction. Once it came off his stick, I lost the puck completely."

Both teams were coming off losses on Saturday and had to travel for the peculiar 5 p.m. starting time. The Rangers (30-16-5) lost 3-2 at Nashville while the Stars were defeated in Buffalo.

Eight of the last 10 games between the Rangers and Stars, including each of the last six, have been decided by one goal. The Stars also won the previous meeting between the teams, 3-2 on Dallas on Dec. 29.

Still, the Rangers have won 12 of their last 16 home games and 20 of their last 26 games overall, since Dec. 8 when they beat Pittsburgh in overtime.

Rangers coach Alain Vigneault, who benched the Rangers top line of Rick Nash, Derek Stepan and Martin St. Louis for the latter part of the second period, had praise for Talbot.

"He gives us a chance to win every game," the coach said. "He's doing what a goaltender is supposed to."

As for benching his top goal scorer -- Nash and Washington's Alex Ovechkin have a league-best 33 goals -- Vigneault said it was a matter of using players who were having a better game.

"Rick hasn't had very many games this year where he's been off," Vigneault said. "Sometimes it happens. At that time, we had no puck possession. We were spending almost the total time in our own end."

Before the game, Lundqvist expressed hope he would return from a throat-area injury before the playoffs.

Lundqvist was injured when he was struck with a shot last Saturday against Carolina. He termed it sprained blood vessel that will be re-evaluated in two to three weeks.

"If I keep playing now, there's a big risk of having a stroke," the 32-year-old goaltender said. "You don't play around with this. It's not like a sore shoulder or something. You have to listen to the doctors."

Talbot, 27, should play a career-high fourth-straight game in the NHL when the Rangers start a four-game road trip in Toronto on Tuesday.

They also have road games against Colorado, Arizona and the Islanders before returning home to face Vancouver on Feb. 19.

Backing up Talbot is 20-year-old Mackenzie Skapski, who has yet to play an NHL game.

NOTES: The Rangers were without forward Jesper Fast, who injured his knee on Saturday and will be out two to three weeks. Defenceman John Moore was a healthy scratch. ... Dallas scratched forward Colton Sceviour and defenceman David Schlemko.