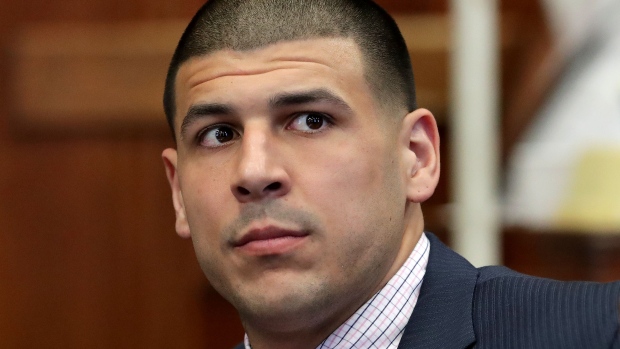 BOSTON — Former New England Patriots star Aaron Hernandez had his jailhouse phone calls hacked ahead of his first murder trial, and prosecutors and his current defence team say they were never told, according to a news report Friday.

The Boston Herald reported that the hacking happened when Hernandez was being held in a Boston jail in the summer of 2014. Hernandez was convicted the following year of killing the boyfriend of his fiancee's sister in 2013. He is now serving a prison sentence of life without parole and is awaiting trial in a 2012 double homicide in Boston.

Peter Van Delft, spokesman for the Suffolk Sheriff's Department, told the newspaper that the breach happened soon after Hernandez was moved there from a different jail.

The department's Superintendent-In-Chief Michael Harris said in a written statement Friday that they discovered the breach during a security check in 2014 and found that its contracted telephone database "had been accessed for telephone calls placed by detainee Hernandez." The department "concluded that nothing discovered as a result of this breach necessitated that the Sheriff's Department should notify the District Attorney," Harris said.

The office also spoke with its contractor, Dallas-based Securus, which then tightened its security protocols, Harris said.

Prosecutors said they were never told the calls had been tapped, and his current defence team said it also was not told. His previous defence team, which represented him during the 2015 trial in Bristol County, didn't comment.

Harris said that the department does not record telephone calls between inmates and their attorneys but that it does follow the national practice of recording non-attorney calls and alerts both parties that the call is being recorded.