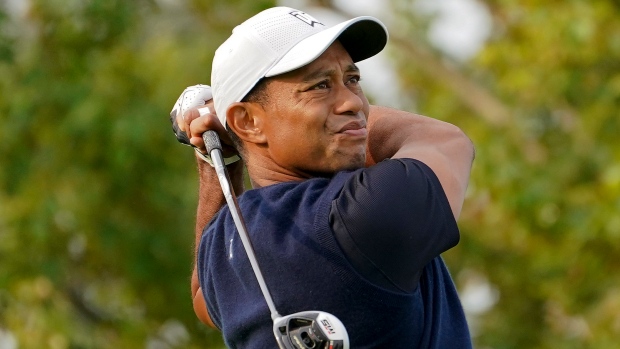 The Hero World Challenge, Tiger Woods’ shootout that’s been held in the Bahamas for the past five editions, is hitting the pause button amid the pandemic.

The 18-player event was set to go Dec. 3-6 at the Albany Club in the Bahamas.

“Given the current global restrictions and ongoing developments resulting from COVID-19, the 2020 Hero World Challenge will not be played this year,” read a statement from the PGA Tour. “This decision was made with the health and well-being of all tournament constituents and the Albany community in mind. We look forward to hosting 18 of the top players in the world and welcoming tournament guests to Albany, Bahamas next year.”

A report from ESPN indicated that a secondary location in Florida was discussed but the major issue was how to get the sponsors and guests from their home base in India.

The event began in 2000 and was held 14 times at the Sherwood Country Club in Los Angeles, site of this week’s Zozo Championship.

Despite it being a closed, limited-field event, it still awarded world ranking points. Last year Henrik Stenson emerged as the winner but most of the attention was focused on Patrick Reed’s mishap in the bunker where he was accused of improving his lie through practice swings.

Dustin Johnson is out of the Zozo Championship this week. That may have come as a surprise to some who remember that the world’s top-ranked golfer just tested positive for COVID-19 last week.

The PGA Tour’s policy allows a golfer to return to play after 10 days of isolation and two negative tests.

Johnson could have met those conditions and been able to play as of Thursday. Not having a practice round shouldn’t have made a huge difference considering he holds the course record at the course where he often played with Wayne Gretzky, a member there.

Johnson will now play at the Houston Open as he prepared for the Masters.

Let’s clarify the citizenship status of last week’s PGA Tour winner Jason Kokrak. Yes, he was born in Canada. No, he’s not a Canadian.

Kokrak, who captured his first PGA Tour event in his 233rd start, was born in North Bay, Ont. That came when his pregnant mother, Teresa, was visiting relatives in that city and Jason decided to arrive a little early. Mom and baby spent a couple of weeks recovering and then made the trip home to Ohio, where he grew up.

Kokrak gets asked about his birth every time he’s at the RBC Canadian Open and dutifully answers the same way. He still has relatives in North Bay.

Another notable municipal golf course is on the blocks in Canada. Winnipeg city officials announced that John Blumberg Golf Course is up for sale.

The facility, which the city has owned since 1964, has an 18-hole and a nine-hole course on it.

The news comes as more and more municipalities in the country look at selling golf courses. In Brantford, Ont., Arrowdale Golf Course was sold with some of the land being developed and some remaining as green space.

There are also calls for municipal golf courses in Vancouver to be turned into affordable housing and those in Toronto to be changed into green space.

The calls come after many locations saw booming numbers of residents teeing it up in a season when golf was deemed as one of the few safe activities.

In Toronto, rounds were up significantly with one person connected to the operation but not authorized to speak, saying that the courses had tee sheets operating at 95 to 98 per cent capacity all summer long.

“We’ll definitely be earning a healthy profit for the city this year,” the person stated.