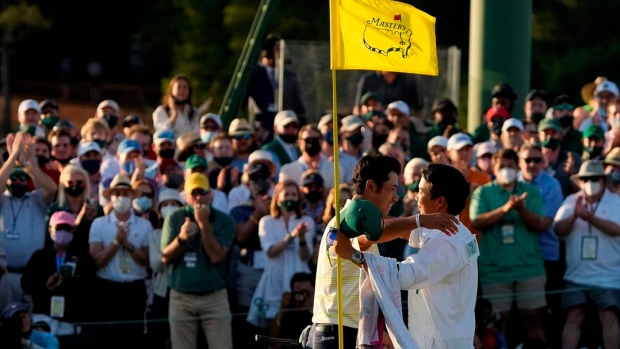 A month after his historic Masters win, Hideki Matsuyama is ready to play golf again.

The Japanese golfer will restart his season this week at the AT&T Byron Nelson after spending most of the last month in his homeland where he was lauded for his major championship win, the first by a male golfer from that country.

That return trip came after his mandatory two-week quarantine. While it didn’t allow for any golf, it did give Matsuyama chance to grasp the impact of his victory.

“Probably the one thing that stands out is I got back to Japan and I was quarantined for two weeks and I was able to probably read every news article and newspaper and magazine and TV,” he said through an interpreter. “And seeing how the Masters win was portrayed in Japan was great, really unforgettable, and that really stands out for my trip back to Japan.”

The notoriously shy Matsuyama admitted to being somewhat embarrassed by all the attention, but at the same time grateful that he brought so much joy to his native land. His win was a huge event back home and during his return, he was recognized by Japanese leader Yoshihide Suga with the Prime Minister’s Award, one of the country’s highest honours. That presentation was one of just two occasions at which Matsuyama wore his green jacket, the other being a media conference.

“I realize now the responsibility that goes with a major championship, especially the Masters,” said Matsuyama. “I'm honoured. I'm flattered by the added attention, but at the same time, sometimes it's difficult to say no. But it goes with the territory and, again, grateful that I have this opportunity and I'll try my best to prepare well for what's to come.”

Matsuyama admitted that he hasn’t played or practised much since he tapped in the final putt at Augusta National. When he wasn’t quarantining or meeting with dignitaries back in Japan, he was spending time with family and friends, including his wife and daughter.

His goal this week is simply to find a game and be somewhat prepared for the next men’s major, the PGA Championship, which starts next week at Kiawah Island, S.C.

Matsuyama’s Masters win was his first PGA Tour victory since 2017. He had become somewhat frustrated that he wasn’t able to turn his good play into victories. He made several changes over the past year, including adding a full-time coach who travels with him and spending considerable time improving his putting which had been a notorious weak link. The hard work paid off with his major title.

“It was a relief, really, to win the Masters,” said Matsuyama. “It had been a while and now moving forward and looking forward I still have the drive to want to win more on the PGA Tour and hopefully the confidence or the relief. It's kind of an unusual combination of the two feelings of how I look at myself, and hopefully I'll be successful in the future.”

That future will include a return trip to Tokyo at the end of July to represent Japan in the Olympics. The expectations on him to deliver a medal at home might make the Masters seem like a club championship. Some have suggested he might even light the cauldron at the opening ceremonies.

For this week, however, he’ll settle for getting back to work on the golf course, the place where he seems to feel quite comfortable.