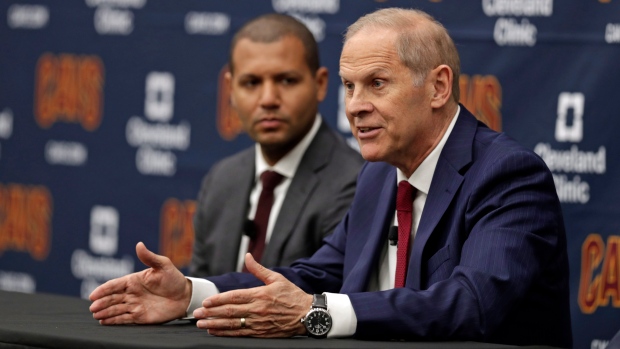 CLEVELAND — The Cavaliers barely survived a stormy season and then watched the NBA's post-season from afar.

With the 5th and 26th picks in the draft, the Cavaliers can add quality talent to a young team now under the direction of new coach John Beilein. He, along with the players selected, will transition to the pro game.

While Cleveland's fans were deeply disappointed the Cavs couldn't conjure more magic and win the lottery for the fifth time since 2003 and have a chance at Zion Williamson, Ja Morant or RJ Barrett — the consensus Big Three in the 2019 class — Beilein was satisfied.

He didn't dwell on falling short. After all, he's missed out on big recruits many times in his career.

"We're in great shape," said the 66-year-old, exuding the same confidence that attracted him to the Cavaliers. "At 5 or 26, we're going to get two really good players. I've gone down the list and I've played against many of those guys or I watched them play on TV or I saw them in AAU."

He's seen a few in person recently as Cleveland has conducted personal workouts and gotten to know prospective picks.

Assuming Williamson, Morant and Barrett are off the board — and barring a major trade, that scenario seems a slam dunk — the Cavs will be positioned to select Texas Tech's Jarrett Culver, Virginia forward De'Andre Hunter or Duke's Cam Reddish, who spent last season playing in the shadow of his Blue Devil teammates Williamson and Barrett.

The 6-foot-7 Culver is one of the best two-way players in this year's draft. The Big 12's Player of the Year as a sophomore, he averaged 18.5 points along with 6.4 rebounds and 3.7 assists. But he was equally effective on the defensive end, and that's where the Red Raiders made their mark in marching to the national title game.

Culver was on Cleveland general manager Koby Altman's radar all last season, and Beilein got an up-close look at him in the NCAA Tournament. The 20-year-old scored 22 and Texas Tech's defence punished Michigan 63-44 in the Sweet 16, holding the high-powered Wolverines to a season-low in points.

Culver's game has continued to mature and the Cavaliers would love to pair him with Beilein, who has built his reputation and resume over four decades developing young players.

It's possible that the New Orleans Pelicans, who acquired the No. 4 pick from the Lakers in the blockbuster trade for Anthony Davis, grab Culver. If so, the Cavs can't go wrong with Hunter, who matched up against Culver in the NCAA championship and is viewed as a solid prospect.

Hunter was at his best during Virginia's title-game victory, when he shook off missing his first seven shots to finish with a career-high 27 points. Hunter has range — he made 44 per cent of his 3-pointers last season — and can put the ball on the floor and attack.

And then there's Reddish, perhaps the most enigmatic of this year's top players.

The 6-foot-8 forward committed to Duke before Williamson and Barrett, then became a third wheel on Mike Krzyzewski's uber-talented squad. Reddish averaged 13.5 points, 3.7 rebounds and 1.9 assists in 36 games, but too often deferred to his more celebrated teammates, raising questions about his attitude and passion.

"My personality is kind of reserved, so people might take that as lazy or too laid back," Reddish said at the NBA Combine in Chicago. "But that's just not who I am. I'm naturally kind of a reserved, calm guy."

Mock drafts have had Reddish going anywhere from No. 4 to 13, but he won't be around when the Cavaliers pick a second time. The No. 26 selection is important for a team trying to cleanse after a 19-63 season that included a coaching change after six games, numerous injuries and the surprise hiring of Beilein, who will be a rookie coach next season.

Beilein knows the Cavs have a long road ahead of them, and he's looking forward to the day when the No. 5 pick isn't Cleveland's.

"Hopefully, the only time we're there again is because we've traded and got the pick from someone else," he said. "But we're going to take advantage of it now."