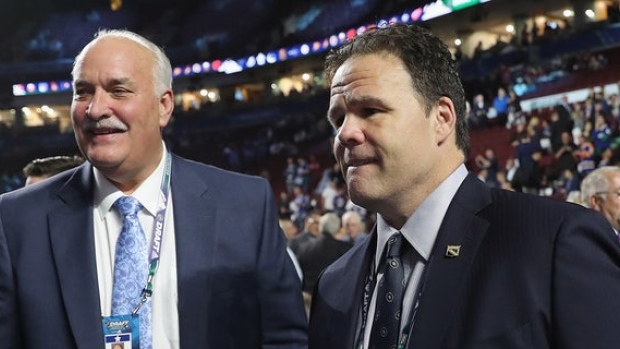 There was the January dressing room dust-up between defenceman Tony DeAngelo and goaltender Alexandar Georgiev that led to DeAngelo’s season-long exile – definitely not a ‘Tony’ Award winner in asset management.

Then superstar Artemi Panarin took a leave of absence in March, shaken after what the team alleged as a Russian political hit piece that really turned out to be a Vladimir Putin supporter just spouting his mouth off in an attempt to curry favour.

Act Three was ignited by Capitals forward Tom Wilson with Monday’s melee at Madison Square Garden, causing the Rangers to condemn his “horrifying act of violence” in a pointed statement the likes of which the NHL has never before seen.

That left Wednesday’s denouement, when the Rangers fired president John Davidson and general manager Jeff Gorton in a plot twist no one saw coming.

That’s a jaw-dropping bite out of the Big Apple.

Associate GM Chris Drury, who was promoted to that title in February after numerous dalliances with other clubs, was named the Rangers’ new president and general manager.

His first order of business will be deciding the fate of coach David Quinn.

“We want to thank ‘JD’ and Jeff for their contributions to the organization,” Rangers owner James Dolan, chairman of MSG Sports, said in a statement. “They are both great hockey professionals who worked hard for the Rangers, however, in order for the team to succeed in the manner our fans deserve, there needs to be a change in leadership.”

While the timing of Wednesday’s news caught most everyone by surprise, multiple sources indicated that the fallout and damage control that came from Tuesday’s statement was more a coincidence than anything else.

Yes, Davidson and Gorton quickly distanced themselves from Tuesday’s unattributed call for the head of NHL Department of Player Safety senior vice-president George Parros, one that was not well received by both the league office and many other clubs and general managers. Sources say Davidson and Gorton told other executives they did not learn of the statement until after it was released.

But Dolan’s unhappiness with the direction of the team had already been simmering to a boil by that point. The sense was that Gorton knew as early as last weekend that Dolan might be considering a change.

That does not necessarily explain why Davidson, hired in 2019 as Sather’s successor, followed Gorton out the door just shy of two years on the job.

It was just over three years ago that Gorton and Sather penned a letter to fans announcing a rebuild after the Rangers won nine playoff series over seven straight postseason appearances.

Since that letter, the Rangers won back-to-back Draft Lotteries – taking Alexis Lafreniere at No. 1 overall last October despite making the 24-team playoff bubble, and jumping up to No. 2 in 2019 for Kaapo Kakko.

There is no doubt Gorton will be atop the candidate list for the NHL’s next GM opening this summer. Forward. Defence. Goaltending. The Rangers have just about every positional box checked with a star for the foreseeable future.

They signed Panarin to an 11-year, $81.5 million deal, where the early 1.38 point-per-game returns suggest he may be one of the best free agent signings in recent history.

They nurtured along 23-year-old Adam Fox into a Norris Trophy candidate. And they’re well positioned in goal with Igor Shesterkin taking over as rightful heir to King Henrik’s throne.

Oh, yeah. The Rangers have two prospects, Nils Lundkvist (10) and Vitali Kravtsov (16), in the Top 20 on TSN Director of Scouting Craig Button’s Top 75 NHL affiliated prospects list. And they have nearly $26 million in cap space awaiting this off-season, with double that awaiting the following year. That’s a blank slate for Drury.

All of that begs the question: Why now?

Maybe the one legitimate complaint for Gorton was not supplying Panarin and Fox and Co. with the proper protection this season, part of which resulted in Panarin getting manhandled on Monday night. New York had no response for Wilson.

But the Rangers did take a step forward this season. They will finish the season in fifth place in a difficult East Division with a goal differential that in most years would signal a playoff spot.

There was no crime in failing to make the playoffs this year behind four hardened, Stanley Cup contenders. There was always going to be one disappointed fifth-place team. It’s just that most would have assumed that’d be the Philadelphia Flyers – who were one win away from the Eastern Conference Final last August. But Broadway is five points ahead of Broad Street.

Then again, Dolan has a notoriously itchy trigger finger.

No one knows drama better than him.