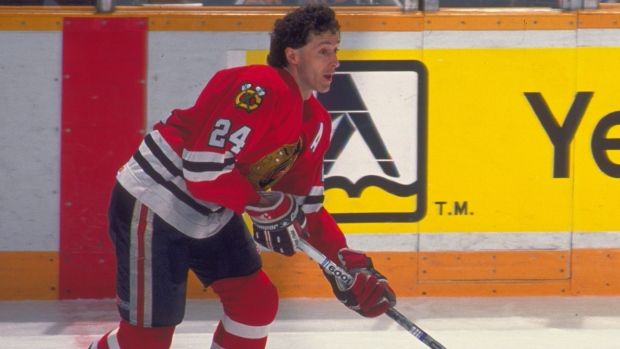 If Doug Wilson finally earns election to the Hockey Hall of Fame on Wednesday, June 24, it will be the end of a 24-year journey for No. 24.

The Chicago Blackhawks’ all-time defenceman leader in goals, assists and points retired in 1993 and became eligible for the Hall of Fame in 1996.

He wore 24 his entire NHL career – 14 seasons with Chicago and two with the San Jose Sharks.

Wilson stood No. 8 in career points (827) by defencemen at the time of his retirement. All seven ahead of him would eventually be named to the Hall of Fame: Paul Coffey, Ray Bourque, Denis Potvin, Larry Robinson, Bobby Orr, Brad Park and Larry Murphy.

The Ottawa native ranks 11th overall in defenceman goals (237), many of them coming from his trademark slap shot, which accounted for a big share of his 85 power-play goals.

Legendary Detroit defenceman Red Kelly is actually listed at No. 7 on NHL.com with 281 goals, but Kelly scored more than 100 times as a forward with Toronto.

The election of Sergei Zubov to the Hall last year is seen as a door potentially opening for Wilson.

There are similarities between the two’s statistical achievements over 16-year careers.

Wilson has higher actual points (827 to 771) and Zubov has higher-era adjusted points (822 to 672). Wilson’s actual totals are enhanced because he played in a higher-scoring era – but there is no denying his comparative stats.

Both Wilson and Zubov had a total of 10 seasons in which they finished in the NHL’s top 10 of defencemen goals and/or points.

That’s an important metric, because as with all-star and award voting, it puts performance in the context of the time NHLers played.

Wilson has more first and second all-star team berths than Zubov (three compared to one), earned a Norris Trophy and finished in the top five in Norris voting four times versus no wins for Zubov and two top-five finishes.

Nineteen of 21 retired winners of the best defenceman honour – awarded since 1954 – are in the Hall of Fame. The only exceptions are Randy Carlyle and Wilson, consecutive winners in 1981 and 1982.

Wilson’s 39 goals in his Norris-winning 1981-82 campaign represent the fourth-highest single-season total recorded by a defenceman. The first, second, third, fifth, sixth and seventh highest goal totals are split evenly between Coffey and Orr.

Perhaps, the biggest difference between Wilson and Zubov is that the latter has his name engraved on the Stanley Cup twice.

Zubov played a prominent part in a pair of Stanley Cup wins, one with the New York Rangers and the other with the Dallas Stars. Wilson never reached the final, making it as far as the third round four times.

Wilson had the misfortune of spending the 1980s in the Western Conference where the Stanley Cup finalist was Edmonton or Calgary eight straight years.

Between the two teams, they won six Cups – five by Edmonton.

It’s worth remembering that two defencemen without Cups on their resumes have been named to the Hall over the past decade: Mark Howe (2011) and Phil Housley (2015).

And how does Wilson compare to them?

Are they destined to overlap again in the Hall of Fame?