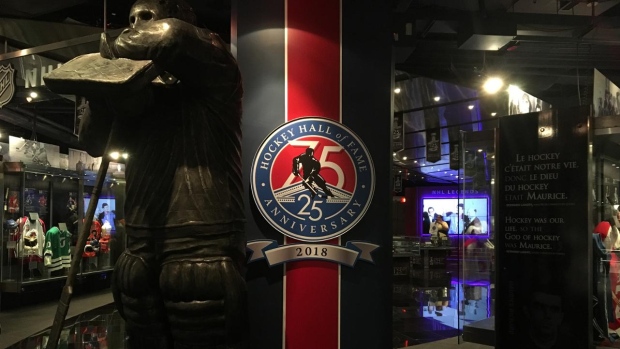 The incoming Class of 2020 will be the first elected to the Hockey Hall of Fame without face-to-face debate and deliberation in the cathedral’s 77-year history.

Instead, the Hall’s 18-member selection committee is scheduled to convene on a virtual conference call on Wednesday and then conduct voting through a secure, secretive online portal.

Yes, every business – even the Hockey Hall of Fame, which has been closed to visitors since March 14 – has been forced to adjust in the era of COVID-19.

“This is a first for us,” HHOF president and CEO Jeff Denomme said. “I don’t think there’s any doubt that these meetings are much better suited for discussion in person, but in no way are we compromising our process. Our selection committee members are knowledgeable and professional and will make sure it’s handled really well.”

In a normal year, the 18 selection committee members arrive in Toronto on a Monday in June, gather for dinner in the Esso Great Hall at the Hall of Fame, and then begin debating nominees on Tuesday morning.

That is nearly impossible this year, particularly with members Jari Kurri, Anders Hedberg and Igor Larionov located in Europe – not to mention the others spread around the continent and the strict safe distancing protocols in place for large gatherings.

This year, Denomme will be at the Hall of Fame with chairman Lanny McDonald and local Toronto-area voters, while selection committee chairman John Davidson will have to use his skills as a former broadcaster to virtually spur and steer the conversation from afar.

“It’s much better in person, there is more spontaneity, no overtalking, but John will get them to talk,” Denomme said. “John is very good at carrying the discussions. He knows the members well and he can get them to speak to their opinions and views.”

Every facet of the conversation is confidential; selection committee members are forbidden from discussing voting or even disclosing the name of a nominee.

Voters will be provided with an election manual that contains all relevant information for each candidate. Individual selection committee members may nominate a maximum of one candidate for each category, including one player, one builder and/or one referee/linesman.

Denomme said some selectors prepare a presentation for their own nominees and the committee will have those presentation slides in-hand as well.

Then it’s time to vote.

Elections will be held in order, starting with male players, then female players, followed by referee/linesman and the builder category last.

“Our bylaws call for secret balloting and we will continue that process virtually in our secure portal,” Denomme said. “Each selector will have a unique User ID and no one, including our staff, will know who is who.”

If the virtual portal is a success, Denomme said the Hall plans to make electronic voting a permanent fixture moving forward, with the committee hopefully meeting face-to-face for debate next year, followed by voting in the room on handheld tablets.

The reason is speed and efficiency.

With a maximum of four male players, two female players, plus two builders – or one builder and one referee/linesman – that can be inducted in any one class, there often needs to be a series of three or four run-offs to determine the honourees.

Any candidate who receives 75 per cent affirmation – or at least 14 of the 18 votes – will be considered elected. Two-time Rocket Richard winner and Golden Goal playmaker Jarome Iginla heads the list of first-time eligible candidates.

“We could have five, six, seven, or eight times through voting in one category, it all depends,” Denomme said. “As opposed to doing it on paper, it doesn’t take that long, but we will be able to tabulate it quite quickly with technology and produce the next ballot.”

Once the Class of 2020 is decided, Denomme said the next big question will be whether the Hall of Fame will need to delay the induction ceremony. It is tentatively scheduled for Nov. 16.

Given the personal nature of the event and the camaraderie of the entire weekend’s events – from the ring ceremony to the Legends Classic Hall of Fame game to the induction itself – Denomme said this isn’t an event that can be conducted virtually.

Denomme said the Hall of Fame has until the end of July or early August to make a determination on November.

“It’s in question, no doubt. I hope we don’t have to consider an alternative, but the worst-case scenario is we have to induct the Class of 2020 together in Nov. 2021,” Denomme said. “That’s a reality we may have to face.”

Until then, Denomme is just hoping deliberation and voting goes off without a glitch.

“It will be interesting. We’ve never done it before,” Denomme said. “I guess we’ll learn."