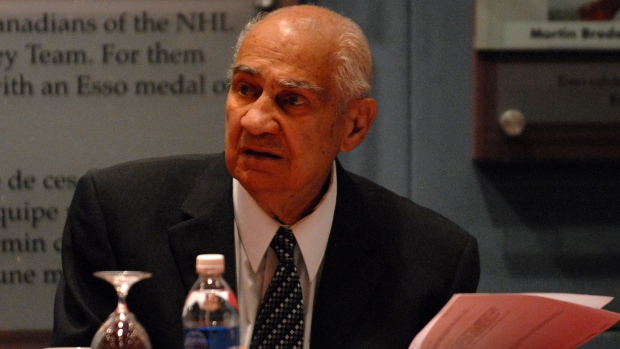 Hockey Hall of Famer Jim Gregory has died at the age of 83, the National Hockey League announced on Monday.

A native of Port Colborne, Ont., Gregory spent a decade as general manager of the Toronto Maple Leafs, acquiring the likes of Darryl Sittler and Lanny McDonald. He was a trailblazer when it came to importing talent from Europe, most notably signing Hall-of-Fame defenceman Borje Salming out of Sweden.

“It is impossible to express the extent to which the National Hockey League family adored Jim Gregory and the loss we feel as a result of his passing,” NHL commissioner Gary Bettman said in a statement. "Jim was one of the first to welcome me to the NHL almost 27 years ago and I have treasured his friendship and relied upon his wisdom every day since. Nobody loved the game more. Nobody ever served it better. We will miss him terribly.”

After attending St. Michael's College School in Toronto, he became the general manager of the Majors with whom he won a Memorial Cup in 1961. In 1964, he won another as head coach of the Toronto Marlboros, winning a third with the Marlies in 1967. That year, Gregory joined the Leafs as the head coach of their Western Hockey League-affiliate Vancouver Canucks before becoming a scout with the NHL club in 1968 and then its GM the following year.

During Gregory's 10-year tenure as Leafs GM, the team qualified for the playoffs on eight occasions, but he was let go after the 1979 season.

Gregory joined the league office as its director of central scouting and worked his way up to senior vice president, hockey operations and supervision.

From 1998 to 2014, Gregory served as the chairman of the Hockey Hall of Fame selection committee. He was inducted himself as a builder in 2007.