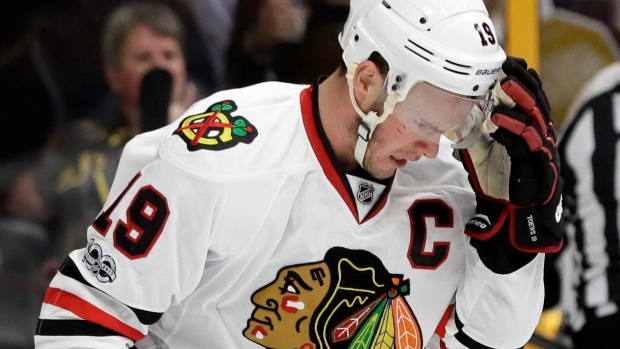 After Evander Kane, Logan Couture and Blake Wheeler spoke out against racism both inside and outside the hockey world, Jonathan Toews is among the latest to speak out.

"A lot of people may claim these riots and acts of destruction are a terrible response. I’ll be the first to admit that as a white male that was also my first reaction," the Chicago Blackhawks captain said in a lengthy Instagram post on Monday.

"But who am I to tell someone that their pain is not real? Especially when it is at a boiling point and impossible to hold in anymore. It’s obviously coming from a place of truth. This reaction isn’t coming out of thin air. I’m not condoning or approving the looting, but are we really going to sit here and say that peaceful protesting is the only answer? There has been plenty of time for that, and if it was the answer we would’ve given it our full attention long ago.

"Listen to these two men debate. They are lost, they are in pain. They strived for a better future but as they get older they realize their efforts may be futile. They don’t know the answer of how to solve this problem for the next generation of black women and men. This breaks my heart. I can’t pretend for a second that I know what it feels like to walk in a black man’s shoes. However, seeing the video of George Floyd’s death and the violent reaction across the country moved me to tears. It has pushed me to think, how much pain are black people and other minorities really feeling? What have Native American people dealt with in both Canada and US? What is it really like to grow up in their world? Where am I ignorant about the privileges that I may have that others don’t?

"Compassion to me is at least trying to FEEL and UNDERSTAND what someone else is going through. For just a moment maybe I can try to see the world through their eyes. Covid has been rough but it has given us the opportunity to be much less preoccupied with our busy lives. We can no longer distract ourselves from the truth of what is going on. My message isn’t for black people and what they should do going forward. My message is to white people to open our eyes and our hearts. That’s the only choice we have, otherwise this will continue. Let’s choose to fight hate and fear with love and awareness. Ask not what can you do for me, but what can I do for you? Be the one to make the first move. In the end, love conquers all. #blacklivesmatter

We must be better.
We must raise awareness through education.
We must be together to make needed change.
Equality for all, justice for all.
I take the pledge.#DifferentTogether

"We must be better. We must raise awareness through education.We must be together to make needed change," Virtanen posted on Twitter. 'Equality for all, justice for all.' I take the pledge. #DifferentTogether"

On Friday, Kane spoke out about racism that exists in the sport. His comments came days after the death of George Floyd, which has spurred days of protests in cities across North America.