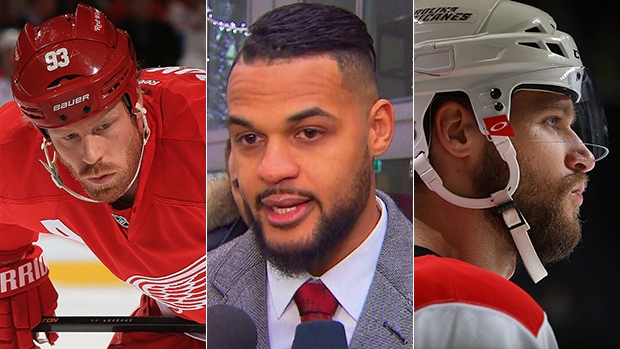 These two and a half weeks have shaken the hockey world to its core.

Coaches, managers and league executives are clutching door frames and furniture, searching for anything sturdy, while they wait for the shaking to stop.

Two NHL coaches have lost their jobs in Bill Peters and Montgomery. Another assistant coach, Chicago’s Marc Crawford, is on leave while his past is under investigation.

But there doesn’t seem to be any hint that this moment of reckoning is nearing its conclusion.

It feels like this examination and accounting of hockey’s ugly underbelly is in its infancy, as if a light has shined on the game’s conscience for the first time in decades, with the holder of the flashlight realizing just how much cleansing there is to do.

There is hope, though, that some good might come from all of this turmoil. Some progress was being made to slowly break through hockey’s notoriously conservative and insular culture – and this watershed moment may have kicked those efforts into high gear.

“It’s time,” Maple Leafs president Brendan Shanahan said Tuesday. “Times are evolving and so we have to evolve.”

NHL executive vice-president for social impact Kim Davis referred to it as a “defining moment,” wondering if what comes next sets the tone for 20 years from now.

“There’s often some kind of defining moment in an organization that causes that organization to both accelerate its efforts, but also to become a rallying call for that organization,” Davis said Tuesday at the NHL’s Board of Governors meeting. “So I see that as positive.”

But in order to understand where the NHL and the game at large is going, it is important to take a step back and recount how we arrived here over the past 16 days.

The story of Mike Babcock’s use of power and control over 19-year-old rookie Mitch Marner was the pull in hockey’s fabric. Then Aliu yanked on it, unravelling the sweater when he pressed send on a series of tweets on Nov. 25, detailing Peters’ use of racial slurs in 2009.

Aliu then detailed his story with TSN, and two of his former teammates in Simon Danis-Pepin and Peter MacArthur had the courage to stand up and be counted when called upon to corroborate the story the following day.

Then the dam broke on the watershed.

Former Carolina Hurricanes defenceman Michal Jordan, now playing in Russia’s KHL, revealed how Peters kicked him and struck an unnamed Carolina player in the head on the bench during an NHL game.

Current Carolina coach Rod Brind’Amour, who was on the bench as an assistant that game and witnessed the physical altercations, confirmed the story on Nov. 27 when he said simply: “It for sure happened.”

Days later, former Red Wing Johan Franzen told a Swedish newspaper on Dec. 2 that Babcock is “the worst human being I have ever met” and alleged that he was bullied by Babcock on a daily basis.

That night, the Blackhawks announced Crawford was placed on leave, after allegations of abuse resurfaced from former players in a previous podcast by Brent Sopel and Patrick O’Sullivan’s 2015 book.

Aliu met with NHL commissioner Gary Bettman and deputy commissioner Bill Daly on Dec. 3 in Toronto, where Aliu’s legal team planted many of the seeds for ideas that Bettman ultimately outlined in his four-point plan on Monday night at the Board of Governors meeting.

Over these 16 days, what began as one racist incident between the Nigerian-born Aliu and Peters touched off stories of physical and emotional abuse among hockey players of all abilities and from all walks of life.

That led to the Stars making the decision to fire Montgomery in response to a recent incident of unprofessional conduct. Bettman said Montgomery’s dismissal was “not related” and was “personal in nature,” but it was only unrelated in the sense that it did not occur within the confines of a rink.

Coaches have been put on notice, but that may just be one role that receives scrutiny in this far-reaching introspection. So far, players have not spoken out about incidents that may have happened with other players and that may come next.

“I think it’s really important to not get sucked into thinking about this as sort of one-size-fits-all,” said Davis. “That’s when you start getting language like a ‘witch hunt’ and all of that, which this is absolutely, in my opinion, not about. This is about creating an environment which is where people, players, those in our sport, feel a level of trust that they believe they can now step forward and speak truth. Speaking truth to power is hard.”

To reach that level of trust, there are many difficult questions that will require examination along the way. Does hockey have a racism problem?

“I believe society has a racism problem,” said Davis, a black woman. “I think to categorize this as a hockey problem minimizes our ability to use this moment in our sport to understand that we are a microcosm of society.”

Shanahan said Tuesday that he came from a generation where there were “certain things that occurred to us as players that you just sort of accepted.” Today’s generation of player is wired differently and as Shanahan said, it’s up to coaches and management to listen as players “communicate how they want to be motivated.”

There are going to be more uncomfortable moments, more aftershocks that register on the Richter scale, before the NHL can achieve the type of change Davis and Aliu and others would like to see.

“We have to measure this in terms of all of the little things that lead up to the big thing,” Davis said. “That’s our vision for this, that this becomes part of the DNA of how we operate – and it’s not just a flavour of the month.”