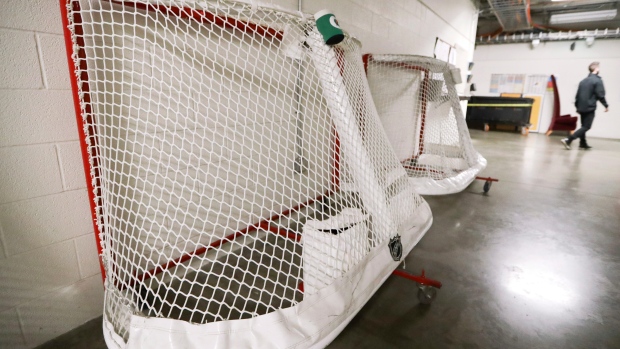 NHL nets used by the Nashville Predators are stored in a hallway in Bridgestone Arena Thursday. , The Canadian Press

The NHL hit pause on the 2019-20 season on Thursday, an unprecedented step to slow the spread of COVID-19. Virtually every major hockey league in the world, with the exception of Russia's KHL, has halted play – including the AHL, all three Canadian major junior leagues, and most top European leagues.

How did we get here?

Here is a timeline of the spread of COVID-19 and how it is has impacted the entire hockey world:

Jan. 11: China reports the first death in Wuhan province, where the novel coronavirus – later identified as COVID-19 – is believed to have originated.

Feb. 28: Switzerland’s National A League becomes the first hockey league in the world ordered to play games without fans, putting the National Hockey League on alert.

March 2: NHL holds GM Meetings in Boca Raton, Fla., where commissioner Gary Bettman says league employees have been barred from overseas travel. There are no restrictions put in place for team personnel and scout travel. When asked by ESPN.com about the potential of NHL playing games absent of fans in arenas, deputy commissioner Bill Daly said: “I think it's very unlikely – knock on wood, I'm hopeful – that we would progress to a stage where we have to consider something that dramatic.” Bettman says it would be “premature to pick any one of the possibilities.”

March 5: Santa Clara (Calif.) County, home of the San Jose Sharks, issues a recommendation to avoid mass gatherings of more than 1,000 people. The Sharks announce they will continue to play games as scheduled.

March 7: IIHF announces cancellation of the 2020 Women’s World Championship to be played in April in Halifax and Truro, N.S.

March 9: NHL, NBA, MLB and MLS issue an unprecedented joint statement closing dressing rooms to media, limiting access only to essential personnel. The Public Health Agency of Canada announces the first coronavirus-related death in the country in British Columbia … Santa Clara County changes recommendation to an outright ban on mass gatherings. Sharks announce they will abide by the ban.

March 10: Ohio, California and the city of Philadelphia issue similar recommendations to avoid mass gatherings ... German, Austrian, Norwegian and Polish professional hockey leagues cancel the remainder of their season, including playoffs ... But the seriousness of the Coronavirus impact remained lost in most NHL dressing rooms, as Blackhawks defenceman Connor Murphy told reporters: "As long as we don't pick our nose too much, we should be good."

March 11: Ohio governor Mike DeWine announces ban on all mass gatherings, including Columbus Blue Jackets home games. Blue Jackets announce they will abide by the ban and prepare to face Pittsburgh Penguins in the absence of fans.

March 12: NHL commissioner Gary Bettman announces the NHL's 2019-20 season has been paused, suspended indefinitely with the intent to resume when it is "appropriate and prudent." The AHL, Canadian Hockey League follow suit ... Switzerland cancels remainder of National League A season.