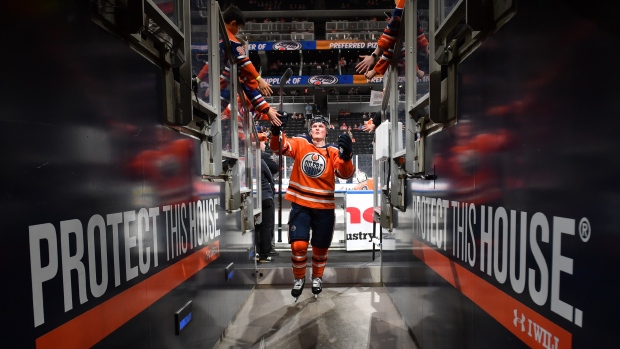 There is little that makes sense in the world right now, least of all Saturday’s news.

The Edmonton Oilers confirmed forward Colby Cave died at the age of 25, unable to wake from a coma following a brain bleed suffered earlier in the week as a result of a rare colloid cyst.

Cave’s wife, Emily, released a statement on behalf of his family.

“Both our families are in shock, but know our Colby was loved dearly by us, his family and friends, the entire hockey community, and many more,” the statement said.

But Cave will be remembered more for his caring touch, his Saskatchewan roots often showing – even when he dropped his gloves with someone on the ice.

Cave rose to prominence in October after an AHL fight in which he knocked Calgary Flames prospect Martin Pospisil out cold with a stiff right hand. He showed immediate concern for Pospisil on the ice, but then Pospisil revealed Cave’s true colours the next day when he tweeted a screen shot of the text messages Cave sent him.

“Hey buddy it’s Cave from the other side, just wanted to reach out and hope you’re ok buddy,” Cave wrote to Pospisil. “Hate seeing that. You’re a tough kid and I respect a guy that stands up for himself. Hope you have a quick recovery buddy.”

Stories like that began to reverberate around the hockey world about Cave, gone way too soon. Oilers vice chair Wayne Gretzky tweeted Cave was a “wonderful hockey player with a bright future, but an even better person.”

Cave was a prototypical energy player in today’s NHL. He collected four goals and five assists in 67 career NHL games, including 44 with the Oilers and 23 with the Boston Bruins.

As Bruins GM Don Sweeney pointed out, Cave signed with Boston “as an undrafted player but his accomplishments in the WHL told a different story.”

“His leadership qualities were beyond his years,” Sweeney wrote in a statement. “When he arrived at development camp and in Providence for the 2015-16 season, he exhibited Patrice Bergeron-like characteristics, on and off the ice. Driven and committed to be an NHL player, Colby was also uniquely unselfish with his own NHL dream, helping his teammates and his coaches, game-by-game and day-by-day.”

“It’s hard to put my feelings into words,” DeBrusk said in a statement. “I was lucky to play junior hockey with Colby. He was our captain and leader. It was an unforgettable moment when we again played together in the NHL for the Boston Bruins. He was an amazing person, player and friend.”

RIP Colby. Here’s a photo I took the day the Bruins visited the Great Wall of China. He was wearing a Humboldt Broncos hat and a permanent grin. pic.twitter.com/RBqdbSIuIU

For Sweeney, there will be one lasting image of Cave, from the 2019 Winter Classic.

“Colby’s red hair underneath that ‘Peaky Blinders’ [style] brimmed hat during the teams’ match into Notre Dame Stadium for the Winter Classic is a special memory,” Sweeney wrote. “Not because the Bruins won that day, but because I know Colby cherished the opportunity to play in that game. The hockey world lost a great person who was beloved by his teammates and everyone that was fortunate enough to spend time with Colby Cave.”

“The National Hockey League family mourns the heartbreaking passing of Colby Cave, whose life and hockey career, though too short, were inspiringly emblematic of the best of our game,” Bettman wrote. “Undrafted but undaunted, Colby was relentless in the pursuit of his hockey dream with both the Edmonton Oilers and Boston Bruins organizations. An earnest and hardworking player, he was admired by his teammates and coaches. More important, he was a warm and generous person who was well-liked by all those fortunate enough to know him.”

The bond between a brother and sister is a special one. It remains unchanged by time and distance and is the purest form of friendship I’ve ever had. You will now, and forever, be my special angel Colb💙 pic.twitter.com/WsbmDrP2BD

Cave’s agent, Saskatchewan-based Jason Davidson, said earlier in the week that his client’s medical condition was unrelated to the COVID-19 virus.

But the ongoing pandemic made it impossible for his family to be at his bedside ­– as detailed in previous heartbreaking updates from Emily – and now puts a pause on the hockey world giving Cave a proper goodbye.

“We are no longer allowed to be in the hospital because Covid-19 rules,” Emily wrote. “We have no idea when we will be allowed to see him again. The nurse has tied his wedding band to his ankle. I am dreaming of being able to touch you, hear your voice, squeeze your hand (3 times), and kiss you again. I love you so much, and my heart is shattered into a million pieces without my best friend.”