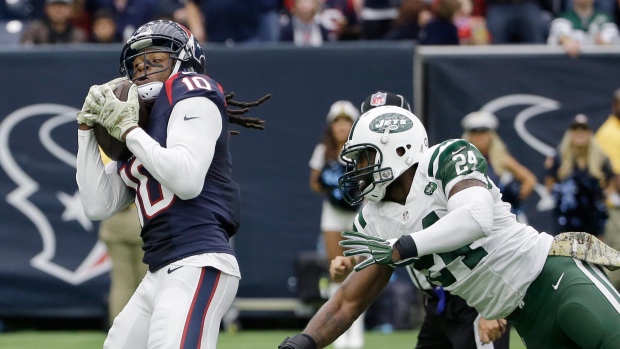 HOUSTON - Playing with their third different starting quarterback this season, the Houston Texans knew they'd need to add some new wrinkles to their offence in order to beat the New York Jets.

Quarterback T.J. Yates got some help in the passing game from receiver Cecil Shorts, who threw a touchdown pass to help the Texans to the 24-17 victory over the Jets (5-5).

Yates tossed two TDs to DeAndre Hopkins, who had 118 yards receiving, and Alfred Blue caught the pass from Shorts, who also took some direct snaps, in the win.

"To be able to move this ball effectively against this Jets defence, we were going to have to give them something that we hadn't shown and I thought we did a good job of that," coach Bill O'Brien said.

Yates, who was signed on Oct. 28 after Ryan Mallett was released, started in place of Brian Hoyer who was out with a concussion.

It was the second straight win he'd led the team to after throwing the winning touchdown pass in a 10-6 victory over Cincinnati on Monday after taking over for Hoyer.

Despite Yates' strong play, Hoyer's job is not in jeopardy.

"Hoyer is our starter," O'Brien said. "When he comes back, when he's healthy, he'll be in there and we've spoken to T.J. about that."

The game was tied in the third quarter when the TD pass by Shorts made it 17-10. Yates and Hopkins linked up for a 20-yard score on the next possession.

Ryan Fitzpatrick, who played after having surgery on his non-throwing thumb on Nov. 13, got New York within 24-17 with a touchdown run with 4 1/2 minutes left, but was intercepted on the next two drives to seal the win for Houston. Fitzpatrick was 19 of 39 for 216 yards with a touchdown against the team he started 12 games for last year.

"I didn't play well," Fitzpatrick said. "There's a lot of throws I needed to make that I didn't make. Obviously having two chances there at the end and not coming up with a touchdown on one of those drives hurts."

Hopkins beat Jets cornerback Darrelle Revis repeatedly before the cornerback left the game in the third quarter with a concussion.

Revis' shutdown skills on defence are often referred to as "Revis Island" because of how receivers are often stranded without the ball. On Sunday, Hopkins said he wasn't daunted by facing one of the league's best cornerbacks for the first time.

"The test, the media blowing up 'Revis Island,'" he said using air quotes. "I had to come out and answer."

J.J. Watt had eight tackles and two sacks, but it was a day where his perfect record on offence was blemished. For the first time in his career, a pass was thrown to him that he did not catch when Calvin Pryor broke up the throw in the first quarter.

It was the fourth time in his career he'd had a pass thrown to him and had reeled in each of the previous three for touchdowns. All of those scores came last season.

Shorts, a quarterback early in his college career at Mount Union, took a lateral from Yates and tossed a 21-yard touchdown pass to a wide-open Blue to make it 17-10 with about eight minutes left in the third quarter. The Texans stole a page out of Jacksonville's playbook on that one. It was the exact same play Shorts executed against Houston last year for the Jaguars.

The Texans made it 24-10 when Hopkins caught a 20-yard touchdown pass late in the third quarter.

The Jets tied at 10-10 early in the third when Fitzpatrick connected with Brandon Marshall for a 21-yard touchdown.

Hopkins put the Texans on top when he got in front of Revis and grabbed a 61-yard touchdown reception to make it 10-3 with about three minutes left in the first half. The play came two plays after another big catch by Hopkins, where he again beat Revis and snagged the ball one-handed for an 18-yard gain.

NOTES: Jets C Nick Mangold left in the first quarter with a hand injury and coach Todd Bowles said he had lacerations in his hand that kept him from snapping the ball. ... Houston CB A.J. Bouye didn't return after leaving in the second quarter to be evaluated for a concussion.