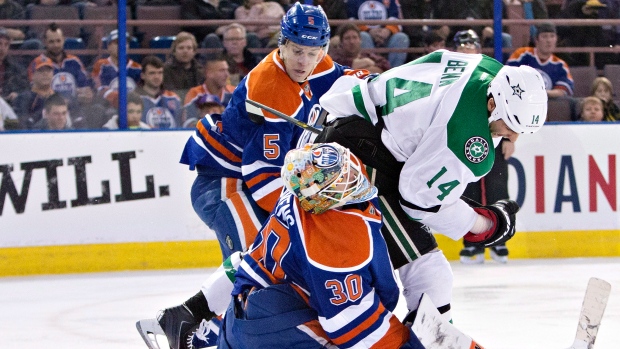 Up 5-2 over Dallas in the last minute of the second period, the Oilers were forced to settle for a single point when the Stars rallied for three unanswered goals to tie the game before Shawn Horcoff scored the winner in the eighth round of the shootout for a 6-5 Dallas victory.

"We were sitting back on our heels a bit for the second half of the game and that can't happen," said Edmonton's interim head coach Todd Nelson, who was overseeing his third game since replacing the fired Dallas Eakins. "When you are up you have to keep forechecking hard and pressing for the puck. Those things weren't happening. We were loose on the puck.

"We need to be consistent for 60 minutes."

Horcoff, a former Oiler, also added a goal in regulation time as the Stars (14-13-5) erased the three-goal deficit to win their fourth straight game.

Tyler Seguin had two third-period goals and added an assist, and captain Jamie Benn scored on the power play at 19:39 of the second period to start the Dallas rally. Erik Cole had the other Stars goal.

"It was a gutsy effort," said Benn. "We laid an egg in the second period and we found a way to grind it out for 20 minutes and found a way to win the shootout. We have a lot of character guys in here and we really wanted to finish this road trip off with two points."

Added Seguin: "We all tested ourselves in the third and I think (head coach) Lindy (Ruff) challenged us. We've had a few games in the past where we've been down a goal or two in the third and we haven't had much of a push, but I thought we dominated the game in the third period."

Taylor Hall and Mark Arcobello each had two goals and Teddy Purcell had the other for the Oilers (7-20-7), who extended their losing streak to seven. They have just one win over their last 19 games.

"You just can't let teams come back like that," said Hall, who halted a career-high 11-game scoring drought. "You can't let them get the momentum. That power-play goal we gave up at the end of the second, that was a world-class goal. I don't know what we could change on that. But in the third period they really forechecked us hard and as a team we were unable to break out and get it into their end.

"It was tough sledding in that third and they had the momentum the whole time. It is tough to play like that."

Horcoff said it's always fun to come up big against your old club.

"Yeah it did (feel good), I'd be lying if I said it didn't," he said. "We needed that win and just coming back in the third the way we did."

Edmonton got on the board first with a power-play goal three minutes in. Stars starter Kari Lehtonen made the stop on a Jordan Eberle shot, but Hall came racing in to shoot in the rebound from a tough angle.

Dallas pulled even three-and-a-half minutes later as the rebound from a Jyrki Jokipakka shot through traffic was corralled by Horcoff in front, and he batted the puck through the legs of Edmonton goalie Ben Scrivens.

The Stars went up 2-1 midway through the opening period as an Ales Hemsky shot deflected off an Oiler defender right onto the stick of Cole, who got the puck by a diving Scrivens.

Edmonton tied the game 11 seconds into the second period as Ryan Nugent-Hopkins battled off a Stars defender and sent the puck across to Purcell, who scored on Lehtonen.

The Oilers then took the lead less than three minutes later as a Jeff Petry point shot was picked up by Arcobello on the Dallas doorstep and hooked into the net to make it 3-2.

Edmonton went up by a pair with just under 11 minutes left to play in the second period as Arcobello followed up a Steven Pinizzotto shot by putting the rebound into the net for his second of the game. The goal chased Lehtonen from the Stars net after he allowed four on 19 shots. Anders Lindback came in as his replacement.

The Oilers went up 5-2 with seven minutes left to play in the second period as Hall got a partial breakaway and beat Lindback through the legs for his second of the game.

Dallas got one of those goals back with 21 seconds remaining in the second as Jason Spezza made a cross-ice feed to Benn, who sent a perfect laser beam of a shot to the top corner.

The Stars made it a one-goal game again 52 seconds into the third period as Seguin took a shot and raced in to deposit his own rebound for his 24th goal of the year and 41st point.

Dallas tied the game 5-5 with 10:47 left in the third period. Scrivens made a stop on a Benn shot but couldn't stop Seguin on the rebound.

Notes: It was the second of three games between the Oilers and Stars this season, with Dallas winning the first contest 3-2 on Nov. 25. The Stars came into the game on a five-game winning streak in Edmonton and having won 14 of their past 17 games against the Oilers. … Hall hadn't scored since last month's loss to the Stars. ... Oilers rookie centre Leon Draisaitl was a healthy scratch, despite not being loaned to play for Germany at the World Junior Hockey Championships. Centre Anton Lander, who was recalled from Oklahoma City of the American Hockey League on Friday, took his place.