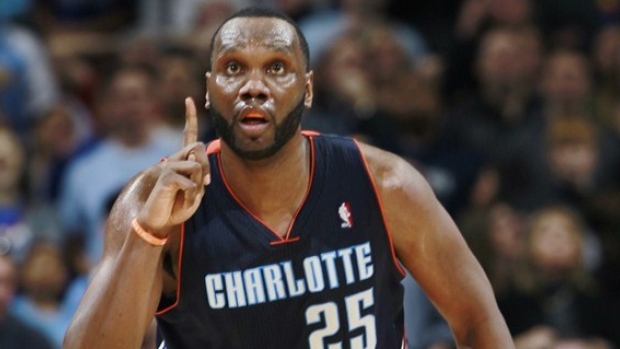 ASHEVILLE, N.C. - Al Jefferson breaks into a wide, giddy smile and anxiously rubs his large hands together when he thinks about what he and the Charlotte Hornets might to able to accomplish this season.

As the Hornets opened training Tuesday in Asheville, Jefferson praised owner Michael Jordan and the team's front office for landing Lance Stephenson and Marvin Williams in free agency and drafting P.J. Hairston and Noah Vonleh — moves he feels will greatly benefit a team that went 43-39 last season but was swept in the first round of the playoffs by the Heat.

"They got the weapons we needed," Jefferson said.

Weapons the 6-foot-10, 289-pound centre believes will help free him up from double teams in the low post — and give the team more scoring options if he kicks the ball back outside.

"I mean, I'm so happy about it I don't even want to talk about it because I feel like I might jinx it," Jefferson said. "I had a lot of fun last year once we got healthy — and I got healthy — and started rolling. This year I think it's going to be ten times better."

It's hard to imagine the 29-year-old Jefferson being much better than last season.

After overcoming a sprained ankle in the preseason, Jefferson got better as the season went on earning Eastern Conference Player of the Month in March and April before an untimely foot injury limited him in the playoffs.

"Based on what I saw from him in September, he has a hunger," Clifford said. "He has a feeling that we can have a really good year and a hunger to prove to people that he can play that well again."

Jefferson has become the face of a once-struggling franchise.

Despite getting snubbed for the All-Star game once again, Jefferson was selected third-team NBA last season.

"I look at it like this: I've never been an All-Star but being one of the top 15 players in the game last year, well, that is pretty good — real good," Jefferson said.

Jefferson is also thrilled to be healthy and in better condition.

On Tuesday, the Hornets jumped right into scrimmaging at Kimmel Arena and Jefferson said he played about 24 minutes.

"Last year at this time I probably would have keeled over," he said with a laugh.

Charlotte played well in the second half of the season and looked to be in position to at least compete with the LeBron James and the Heat in the playoffs. But any chance of an upset bid ended when Jefferson injured his foot in the first quarter of Game 1.

He limped through the remainder of the series — getting pain-killing injections before each game —until he eventually had to sit out Game 4.

Looking back, Jefferson said he wasn't even close to being 50 per cent healthy.

"It was pretty bad," Jefferson said. "A lot of my favourite moves I like to do (in the low post), I couldn't do because of the foot. I could hardly run. It was painful."

He still averaged 18.3 points and 9.3 points in three games. But the injury demonstrated just how important the man teammates simply call "Big Al" is to Charlotte's chances of making a deep playoff run.

He's not worried about a reoccurrence. Although he still wakes daily with soreness in the foot, he said it subsides once he begins to move around.

Clifford said Jefferson's willingness to play even at half-speed on basically one foot spoke volumes about his commitment to the franchise. He said in just one year Jefferson became the team's leader and the stabilizing figure on a young team.

"To me he totally accepts the responsibility of being the best player — and that's a big thing," Clifford said.

Now Jefferson is ready to move on to bigger and better things this season. He flashed his wide smile again when asked what he has planned for an encore