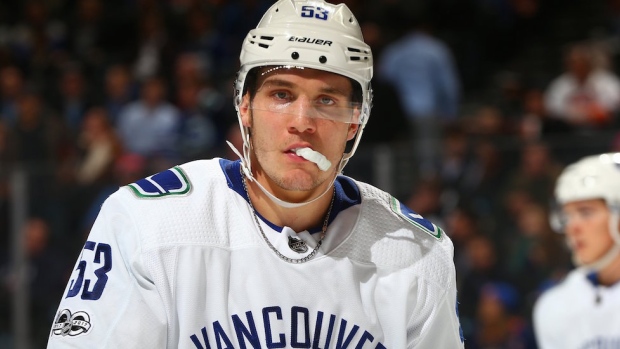 CHICAGO — Three of Canada’s seven clubs have a vacancy at captain and Bo Horvat says he is ready to fill the void for the Vancouver Canucks if called upon.

Horvat had a front row seat watching one of the best in Henrik Sedin for four seasons, learning what it means to lead. Now after serving as the Canucks’ de-facto captain last season following Sedin’s retirement, Horvat was asked whether he could be the one to replace him.

“I’d be ready to make that next step,” Horvat said Thursday at the annual NHL / NHLPA Player Media Tour. “I think it’s obviously up to the GM and the coaching staff to decide who they think is the best fit … It’d be an unbelievable honour to wear the ‘C’ – or to wear any letter for that matter. Even to be up for consideration is definitely humbling.”

Horvat said there is “no rush for our team to name one right away.”

That has been the trend league-wide. The Toronto Maple Leafs have gone without one for the past three seasons since Dion Phaneuf was traded away in Feb. 2016, but all eyes are on whether an announcement will be made before this next campaign starts.

The Ottawa Senators are in wait-and-see mode since Erik Karlsson’s departure. The Vegas Golden Knights haven’t named a captain in their two season existence. The San Jose Sharks have an opening with Joe Pavelski’s signing in Dallas, ditto the Carolina Hurricanes while Justin Williams deliberates his future. The Rangers and Red Wings also have vacancies.

That means eight of 31 NHL teams – more than a quarter of the league ­ currently do not have a captain.

All of which begs the question: Does having a captain, a tradition seemingly more important in hockey than most other professional teams sports, really matter in 2019?

Patrick Kane says yes, having experienced the impact Jonathan Toews has made for more than a decade in Chicago.

“I think it’s nice to have one guy defined as your leader,” Kane said. “It’s pretty much a no-brainer to have [Toews] as your captain and your leader. He’s been doing it so long and he’s done such a great job that I think it helps our team to have a guy that you can look to to lead discussions, say the right things in the locker room and lead things off the ice.”

Freshly minted Conn Smythe winner Ryan O’Reilly believes “leadership is plural” and acknowledges that “every team is different.” He said a bevy of voices contributed on the Blues’ Stanley Cup run, even though Alex Pietrangelo was the man accepting hockey’s holy grail from Gary Bettman last June.

O’Reilly said being the face of a team may be more for the public.

“It’s nice for fans to see that, it shows that there is that leader there,” O’Reilly said. “I think it helps for sure if you have that, but I’ve seen when there isn’t a captain, I still feel it can work.”

Horvat, now 24, said having a captain is important.

“I think it’s nice to have a guy to lean on and a guy to go to when times are tough, have somebody for the guys to set the tone for the young guys, even the older guys to follow,” Horvat said. “It wouldn’t change who I am and it wouldn’t change the type of player I want to be. I wouldn’t let it affect me that way, I’d just try to be the best leader I can be.”

He marvelled at the way both Sedins – and Henrik in particular, as captain – stood daily as the faces of the franchise taking bullets during painful seasons in the twilight of their careers.

“The last three years, it definitely wasn’t easy standing in front of the media and taking the heat, talking every single day,” Horvat said. “Just watching it, you were like ‘How did these guys do it?’ I kind of had that responsibility last year, so I got a little bit of practice at times, which was good for me I thought. I’d be ready to make that next step.”

Horvat played through the lean years, now he is ready to grow with a Canucks team seemingly on the rise. The two-way pivot is coming off a career-best 61-point season and he’s excited about the additions of J.T. Miller, Micheal Ferland, Jordie Benn and Tyler Myers – not to mention the sophomore season of Swedish sensation Elias Pettersson.

“I don’t think he has a ceiling, to be honest with you,” Horvat said of Pettersson. “Look out.”