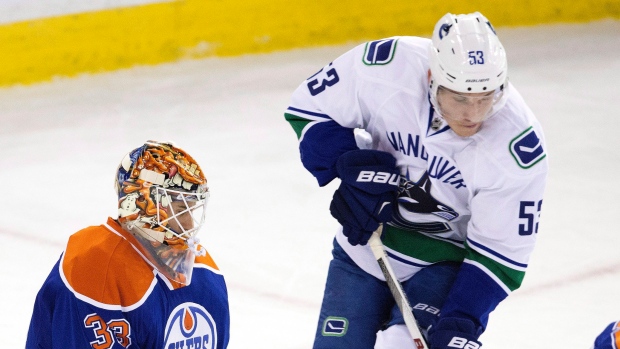 EDMONTON - It took some time, but the Vancouver Canucks have found their scoring touch.

Bo Horvat had two goals and an assist and Sven Baertschi had four assists as the Canucks spoiled Edmonton's spotless pre-season record with a 5-2 victory over the Oilers on Thursday.

Vancouver had only scored seven goals total in its previous six pre-season games.

Ben Hutton, Yannick Weber and Jake Virtanen also scored for the Canucks, who improved to 3-3-1 in exhibition action. Virtanen tacked on two helpers for a three-point outing.

"I thought Bo had a real strong game, he's a real good skater," said Vancouver head coach Wille Desjardins. "I thought Jake played one of his better games, went to the net well, battled hard. Baertschi was good too, I thought the whole line was good."

Baertschi, who split time last season in the American Hockey League, was happy to pick up the pace on offence.

"I felt I was practising really well and I was unable to translate the practices into the games," he said. "It's good to get some points, but I thought our line the way we played was really simple and in the end we created a lot and that's what I'm all about. I want to create offence, so it was good to finally get going."

Taylor Hall and Nail Yakupov scored in response for the Oilers, who dropped to 6-1-0 in exhibition play.

"Tonight was kind of the first night that things didn't go according to plan," Hall said. "The battle level wasn't there on some plays. It's something we have to fix before the pre-season is done."

Oilers goalie Cam Talbot, who was acquired in the summer from the New York Rangers, took much of the blame on is shoulders.

"I have to play better, bottom line," he said. "They didn't trade for me to come in here and play like that. I didn't think I played very well at all."

It didn't take long for the scoring to start as Edmonton got on the board 1:29 into the game when Hall was able to sweep the puck into the Vancouver net after Canucks starter Jacob Markstrom made the initial stop on a backhand attempt by Connor McDavid.

Vancouver responded just 23 seconds later as a pass from behind the net by Virtanen that caught Talbot by surprise, hitting his stick and deflecting right to Horvat for the goal.

The Canucks took a 2-1 lead with eight minutes remaining in the opening period as Horvat screened Talbot in front to allow for a goal on a long shot from Hutton.

Edmonton tied the game with 42 seconds left in the first as Yakupov put on a burst of speed and then beat Markstrom with a quick wrist shot.

Vancouver got a gifted goal 24 seconds into the middle period as Andrej Sekera put a no-look backhand clearing attempt right on to the stick of Weber in front, and he scored a power-play marker.

The Canucks took a two-goal lead with 4:36 left in the second as a Weber hit Virtanen in the face and the puck caromed into the net.

Virtanen was cut badly on the play and left the ice, but was back for the third period and picked up an assist on an early breakaway goal by Horvat.

The two teams play each other again on Saturday in Vancouver to close out the pre-season.

Notes: While the Oilers were close to icing their regular season-starting lineup, the Canucks were still looking at some bubble players and sat out their top line, including Henrik and Daniel Sedin, neither of whom have recorded a point in three pre-season games apiece.