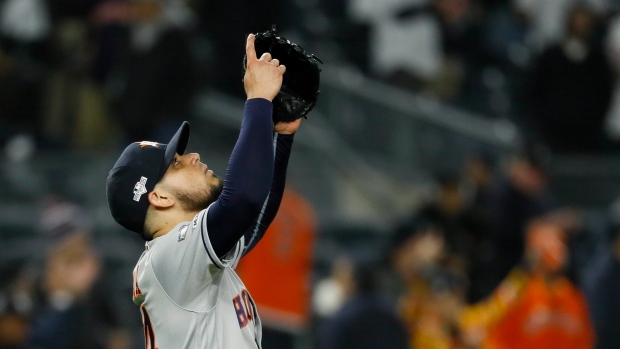 HOUSTON — The assistant general manager of the Houston Astros apologized Tuesday for using "inappropriate language" after a Sports Illustrated report said he repeatedly yelled toward a group of female reporters about closer Roberto Osuna during a clubhouse celebration.

Brandon Taubman released a statement through the Astros hours before they played Game 1 of the World Series against Washington. Major League Baseball said it will interview those involved before further commenting.

Taubman's remarks after the Astros clinched the AL pennant reportedly referenced Osuna, who was suspended for 75 games last year for violating MLB's domestic violence policy before being traded from Toronto to the Astros.

According to SI, Taubman shouted "Thank God we got Osuna!" and made similar remarks several times, punctuating them with an expletive.

SI said one of the reporters was wearing a domestic violence awareness bracelet. The incident occurred after the Astros beat the New York Yankees at Minute Maid Park on Saturday night in Game 6 of the AL Championship Series.

On Monday night, after the SI story was published, the Astros called it "misleading and completely irresponsible." The team said SI had tried to "fabricate a story where one does not exist" and said Taubman's comments weren't directed at the reporters.

Taubman, on Tuesday, said he was "deeply sorry and embarrassed."

"In retrospect, I realize that my comments were unprofessional and inappropriate. My overexuberance in support of a player has been misinterpreted as a demonstration of a regressive attitude about an important social issue," he said.

MLB said in a statement that "everyone in baseball must use care to not engage in any behaviour — whether intentional or not — that could be construed as minimizing the egregiousness of an act of domestic violence."

"The Astros have disputed Sports Illustrated's characterization of the incident. MLB will interview those involved before commenting further," it said.

Astros manager AJ Hinch said Tuesday that he wasn't aware of the incident until the story came out and that he hadn't spoken to everyone involved in it but that "we all need to be better across the board, in the industry" when it comes to matters such as these.

"I'm very disappointed for a lot of reasons," he said. "It's unfortunate, it's uncalled for. For me as a leader in this organization down here in the clubhouse, on the field, I take everything that happens in the clubhouse to heart."

"No one, it doesn't matter if it's a player, a coach, a manager, any of you members of the media, should ever feel like when you come into our clubhouse that you're going to be uncomfortable or disrespected," he continued.

Canadian prosecutors dropped a domestic assault charge in September 2018 against Osuna, who agreed to stay away from a woman identified by authorities as the mother of his child for one year and continue counselling. The prosecution said the woman, who lived in Mexico, had made it clear she would not travel to Toronto to testify against Osuna.

Osuna was charged with assault in May 2018. The Blue Jays traded him to Houston two months later.

Astros owner Jim Crane, in a statement, said the team has mandatory training for its employees and "we fully support MLB and baseball's stance and values regarding domestic violence."

Also Tuesday, the Baseball Writers Association of America denounced the incident and the team's handling of it and called for multiple members of the Astros front office to issue a public apology to the media outlets involved in the story.

The BBWAA's statement said it was "alarmed and dismayed by the actions" of the team and its public relations department and said the team's denial of the incident was "an unethical and intentional fabrication, designed to discredit our members and all journalists."