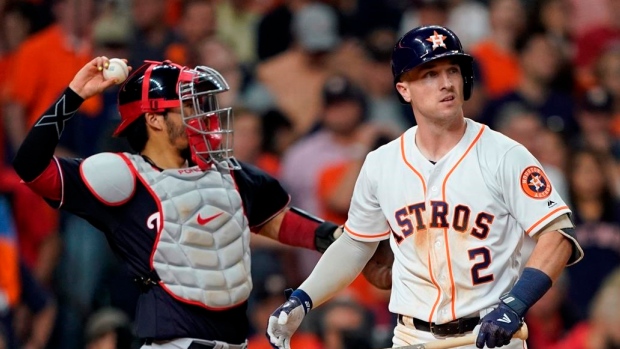 HOUSTON — The chants of "M-V-P!, M-V-P!" still break out from the crowd each time Alex Bregman comes to the plate at home for the Houston Astros.

And the cheers got louder when Bregman hit a towering two-run homer in the first inning of Game 2 of the World Series on Wednesday night. After that, there wasn't much else for Astros fans to cheer about.

That homer by Bregman produced the only Astros runs until the ninth inning in a 12-3 loss to the Washington Nationals, who took a commanding 2-0 series lead.

Going into the game, Bregman was 3 for 22 (.136) with one RBI since the start of the AL Championship Series. The third baseman struck out three times while going 0 for 4 with a walk in Game 1, including two strikeouts with runners on base in a 5-4 loss to Washington.

The Nationals have won 18 of their last 20 games, the best 20-game stretch in team history.

That includes a current eight-game winning streak, matching the longest in a single post-season. The other teams that do it were the 2014 Royals, the 2005 White Sox and the 2004 Red Sox.

Boston won the World Series with a sweep of the Cardinals in 2004, a year before the White Sox swept Houston in its first World Series when still in the National League. The Royals lost in seven games to the Giants five years ago.

Washington manager Dave Martinez isn't saying yet if Patrick Corbin, who was 14-7 in the regular season, will be the Game 4 starter on Saturday night. Corbin threw a scoreless inning in Game 1, his fourth relief appearance this post-season.

"I talked to Corbin a little bit. He's going to go throw today and we'll see how he feels after he plays catch," Martinez said before Game 2. "These guys, they're all in. And this is based on a conversation I have with them every day."

Sánchez has allowed one run in 12 2/3 innings in two post-season starts. He had 7 2/3 scoreless innings against St. Louis in Game 1 of the NL Championship Series on Oct. 11.

Corbin was the winning pitcher in the pennant-clinching 7-4 win over the Cardinals on Oct. 15, when he gave up all four runs in five innings.

The last 11 teams to take a 2-0 lead in the World Series went on to win the championship, including Boston last season.

There have been 55 teams previously to win the first two games, and 44 of them (80 per cent) took home the trophy.

For Astros fans looking for some hope, this is the fifth time since 1973 that a team won the first two World Series games on the road. Only the 1999 New York Yankees went on to win the series.

The 1996 Braves lost in six games to New York after winning the first two games at Yankee Stadium, the 1986 Red Sox fell in seven games to the Mets, and the 1985 Cardinals lost to the Royals in seven games.

The last team to have at least 12 runs and 14 hits in the World Series before the Nationals did in Game 2 was the Houston Astros in Game 5 two years ago against the Los Angeles Dodgers.

A FLIP TO PITCH

That was quite a setup and delivery for Simone Biles before Game 2 of the World Series.

The Olympic champion gymnast did a backflip with a twist, and stuck the landing before someone tossed her a baseball. She then threw the ceremonial first pitch to Astros outfielder Jake Marisnick.

Biles, who grew up in the Houston area, won five gold medals at the recent world championships and holds the record with 25 medals by any gymnast, male or female. She will try to add to her five Olympic medals during the Tokyo Games next summer.