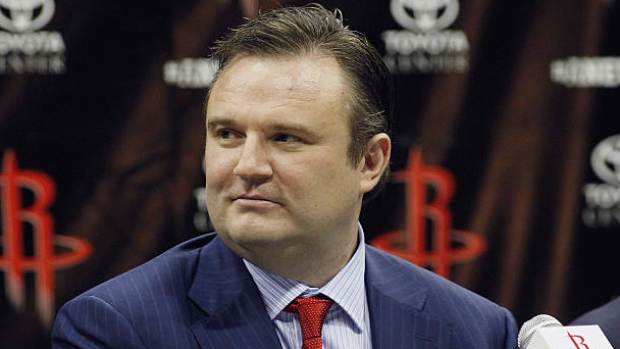 Houston Rockets general manager Daryl Morey is stepping down on his own accord.

The Rockets announced the move Thursday night, a little over a year after he sparked a rift between the NBA and Chinese government last year when he tweeted support for anti-government protesters in Hong Kong. Morey said he's leaving the team Nov. 1.

“It has been the most gratifying experience of my professional life to lead the Rockets basketball organization, and I look forward to working with Tilman and the management team on the transition," Morey said in a statement. “I am very confident that the future – for the Rockets, and for our incredible fans – is in great hands, and that the Rockets will continue to perform at the highest level.”

Tilman Fertitta, who has owned the Rockets since 2017, thanked Morey for everything he did in his years with the team.

“Daryl is a brilliant innovator who helped the Rockets become a perennial contender," he said in a statement. “I have truly enjoyed working with Daryl and couldn’t have asked for a better general manager to have at the start of my ownership."

Morey caused an international uproar last year when he tweeted support for anti-government protesters in Hong Kong. Morey tweeted an image that said: “Fight For Freedom. Stand With Hong Kong.” His tweet was in reference to pro-democracy demonstrations in the semiautonomous Chinese territory that had been mired in escalating violence between protesters and law enforcement.

The tweet caused businesses in China to cut ties with the Rockets and broadcasters there refused to air the team’s games this season. NBA telecasts in China, however, resumed during the recent NBA Finals.

The Rockets have made the playoffs 10 times since Morey was hired in 2007, including the last eight seasons for the longest active streak in the NBA.

Morey was responsible for the blockbuster trade that brought James Harden to Houston from Oklahoma City. The Rockets reached the Western Conference finals twice under Morey but were unable to win their first championship since consecutive titles in 1994-95.

The move comes after coach Mike D’Antoni told the team he would not return after the Rockets lost to the Lakers in the conference semifinals.

Morey is an MIT graduate who became one of the early proponents of the use of analytics in the NBA. He was always making a trade or deal of some kind and was also responsible for the signing of Dwight Howard in 2013 and for trading multiple players to the Clippers in 2017 for Chris Paul. He then dealt Paul to the Thunder before this season for Russell Westbrook.

In perhaps his most unconventional move, he got rid of centre Clint Capela in a three-team trade in February and the Rockets played “small ball" the rest of the season without a true centre.

Morey worked as Houston's assistant general manager for one season under Carroll Dawson before he retired after the 2007 season and Morey was promoted to his job.