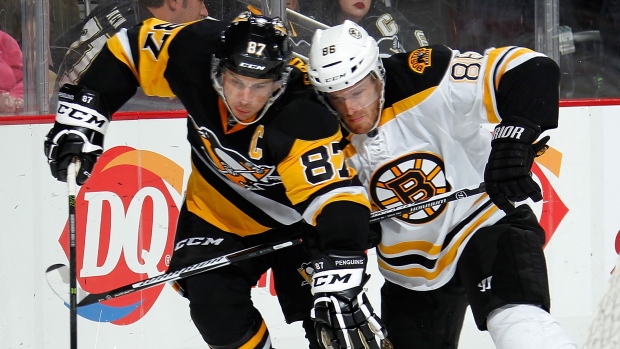 Let's call it the lament of the modern-day NHL general manager.

"The league is so close now, there's so much parity now, every game is a battle," one GM said plaintively. "It's so hard to make the playoffs now. So hard."

It's not lost on the men who live and die with every win or loss or loser point‎ in today's game that in the heady days (circa 1979) of the ‘Original 21,’ 16 teams made the playoffs. Today, with 30 teams, and, quite possibly, soon to be 31 - hands up anyone who seriously doesn't think Las Vegas won't be awarded an expansion franchise - it's still the same number (16) going to the post-season each year.

Should it be more?

It was during a rather routine conversation with a GM recently when I asked myself that very question but only after the GM raised the issue himself.

If that isn't the basis for a flash poll of NHL GMs, I don't know what is.

So the question I posed to the thoughtful 30 over the last 48 hours was as follows:

Yes or No to a "Play In" single-game elimination to determine the final wild card spot in each conference‎?

That is, the team holding down the final wild card spot after 82 games would have to play host to a single-game elimination ‎against the next closest team in the standings. Winner claims the final playoff spot; loser goes home.

If you want to better visualize it, two years ago the Detroit Red Wings in the East and Dallas Stars in the West would have had to host a single-game elimination against the Washington Capitals (three points behind Detroit) and Arizona Coyotes (two points behind Dallas), respectively, for the right to play their way into the playoffs on the day or two after the end of the regular season.

So, gentlemen, what say you?

The results were fascinating, for two reasons.

One, because it’s clear there is some real support for the concept of a "Play In" game‎.

One was caught in that area between undecided and apathetic.

Two, merely asking this question triggered a torrential response‎ that was quite jarring and revealing.

It turns out that five of the ‎11 GMs who voted No to a single elimination "Play In" game did so not because they're opposed to potentially broadening the playoff spectrum.

Quite the opposite, in fact.

One GM proposed the following:

Top three teams in each division are guaranteed a playoff spot. Fourth and fifth-place teams in each division would meet in a best-of-three ‎series with the winner becoming the fourth seed within the standard best of seven divisional playoffs. Recognizing there may be time/scheduling constraints, the GM said these "Play In" series may have to be three games in three days but there's the added incentive to finish top three in the division.

Another GM offered up the following proposal:

Top three teams in each division are guaranteed playoff berths but the top four wild card teams in each conference would have to play a best-of-three "Play In" series (WC1 vs. WC4 and WC2 vs. WC3‎) with the two winners claiming the final two playoff spots in each conference. In order to accommodate these best-of-three series, this GM also proposed that the first round of the playoffs be best-of-five instead of best of seven.

Quite aside from whether you like these concepts or whatever logistical concerns they may raise, the takeaway for me was how passionate so many of the GMs are about expanding the playoff pool in some fashion.

Think about it: 21 of 28 GMs are in favor of some type of "Play In" concept, either single elimination games for one wild card spot in each conference or as many as four best-of-three‎ series for all the available wild card positions.

The passion was unmistakable.

"We really need to make this happen," one GM said.

That isn't to say the (minority) opposition isn't equally r‎esolved to maintain the status quo.

"We play 82 games for a reason, and there has to be this reason: to make the playoffs," said one GM, who added he would only reconsider that stance if expansion added another two teams in each conference.

Another said: "No changes (to playoff format) for me until we get the conferences balanced with the same number of teams."

"Eighty two games is a pretty good sample size," a third dissenter said. "I understand the drama created (by a Play In game or series) but I'm not sure league parity should promote that."

Some of the GMs who voted in favor of single-game elimination Play In concept admitted they don't love the idea as much as they think it's the right thing to do to sell and market the game.

"Never been a fan of single elimination games," one GM said, "but it seems to have worked in baseball." He added the hype surrounding these games would generate greater interest in many non-traditional hockey markets.

"Sixteen of 30 is probably the right number (to make the playoffs) but it would be great for the sport to have the drama of single-game eliminations," added another GM who reluctantly voted Yes for the Play In.

Mostly, though, the chorus of support was loud and strong, for a variety of reasons:

"It's worked so well in baseball."

"It would give the NHL another event to hype in additional markets."

"I'm in favor of anything that includes more teams. The races are too tight, parity is too high."

"I'm not a big fan of 50 per cent of the league not in the playoffs. It makes for unhappy owners."

And finally, this from the GM who proposed the first best-of-three Play In concept:

"I haven't heard a good argument why expanding the playoff pool is bad," he said. "What's the downside? Fans will love it. Players should also love it. It would bring in more revenue. Who would object to that?

"I think it's time. It's never been more competitive and difficult to qualify for the playoffs than it is now. This (Play In concept) makes a lot of sense."

There was a push several years ago for the league to consider expanding the playoffs in some fashion but it never got any real traction with the powers that be in Hockey Operations. It has, historically, been something the league head office hasn't been willing to embrace at all.

I wouldn't hold my breath on that one.

Perhaps we'll find out when the GMs have their annual meeting in Boca Raton, Fla., in mid-March.

But there's clearly interest from a significant number of the tortured souls who are charged with getting their clubs into the post-season ‎parade to consider a Play In concept.

In the meantime, discuss amongst yourselves.