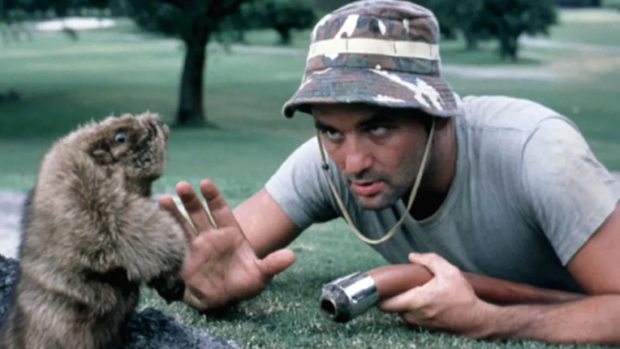 The Players Championship was cancelled, along with four other PGA Tour events. The Masters has been postponed. The European Tour and LPGA Tour have stopped play.

All smart and necessary decisions in the wake of the COVID-19 pandemic.

So, whats a golf fan to do while self-isolating? How to get some sort of fix?

Were here to help! There is plenty of great golf content on streaming services, ranging from movies to matches. Heres a guide to where you can find it all on Canadian services.

Crave (owned by Bell, which also owns TSN) is the place to find two of the greatest golf movies of all time.

In my opinion, the greatest of all golf movies and perhaps the funniest sports movie ever made. It was released 40 years ago, yet remains iconic. The cast of Bill Murray, Chevy Chase, Rodney Dangerfield, Ted Knight and Michael OKeefe deliver a hilarious send up set at Bushwood Country Club.

Interesting Fact: Tiger Woods knows many of the signature lines by heart.

Adam Sandler stars in the title role as a hockey player who turns to pro golf in a bid to earn enough money to pay off his grandmothers tax debts. Along the way he ends up in a punch-up with game show host Bob Barker.

Interesting Fact: The film was shot in B.C., primarily at Swaneset Bay Resort and Country Club, and Furry Creek G&CC

Netflix in Canada doesnt have much in the way of golf offerings. I was able to find just two documentaries.

This 2013 documentary focuses on a group of seven- and eight-year-old golfers as they prepare for and compete at the 2012 U.S. Kids World Golf Championship. Four of the kids are Americans and the other four from different parts of the world. Its a revealing look at the kids, the parents and the preparations.

Interesting Fact: One of the subjects is Allan Kournikova, the half-brother of former tennis star Anna.

If youre a big fan of the former world No. 1 or have exhausted all the other options, you can watch this biopic. Just a note that its in Thai with English subtitles.

The Legend of Bagger Vance

The great cast of Will Smith, Matt Damon and Charlize Theron deliver the tale of a down-and-out golfer Rannulph Junuh (Damon) and how his mystical caddie, Bagger Vance (Smith), restarts his golfing career and his life in 1930s Georgia.

Interesting Fact: This was the last movie made by Jack Lemmon before his passing.

If you dont mind subtitles, this Indian production is quite entertaining and filled with laughs. Based on Happy Gilmore, it features Ali, a poor man who goes from selling underwear on the street, to gangster to golfer trying to win money to help his mother.

Interesting Fact: Amy Jackson, who stars as the love interest of Freaky Ali, was Miss Teen World in 2009

Caddyshack: The Inside Story

If you love Caddyshack, youll love this documentary on the making of the movie. It interviews the main characters and gives a peak behind the scenes of the wild party atmosphere that took place during the filming.

Rapper Big Boi stars as a C-Note Hawkins, who is denied entry into an exclusive country club. To get around the rules, he buys a piece of land on which the 17th hole sits and holds the club hostage until it gives him a membership. The rest of the story is how the club members try to get him kicked out.

Interesting Fact: Critics called this a rip-off of Caddyshack and it has an approval rating of six per cent on Rotten Tomatoes.

A 1953 classic film with the team of Jerry Lewis and Dean Martin. Lewis plays a golf instructor who teaches Martin to the point where he becomes good enough to play in tournaments. Lewis becomes his caddie and the two play in events. However, their on-course bickering leads to Martin getting disqualified but gets them a job as comedians.

Interesting Fact: Martin debuted the song Amore! in this film, which became his signature song.

The great series from the 1960s presents matches between top players of the day in locations around the world. Many featured Canadian locations and players, with George Knudson appearing many times. Almost all are available on YouTube and, if nothing else, it allows you to see the silky swing of Knudson. Here are a few memorable episodes:

Interesting Fact: As an amateur, Streit wasnt allowed to receive compensation for appearing. Instead her payment was put into a trust to help young Canadian women travel to tournaments. The fund still exists to this day.

This is a buy/rental service offered by YouTube and its where youll find a number of top golf films.

Kevin Costner plays Roy McAvoy, the down-and-out golf pro working at a driving range. He ends up trying to qualify for the U.S. Open in a bid to win the heart of Molly Griswold, played by Rene Russo. The film has the infamous moment of McAvoy hitting shot after shot into the water before recording a 12.

Interesting Fact: The 12 McAvoy took is based on the real-life experience of Gary McCord.

The Greatest Game Ever Played

The true story of Francis Ouimet, who grew up in poor conditions near The Country Club in Boston, Mass. It follows his dramatic story from his time as a caddy to taking on heavyweights Ted Ray and Harry Vardon in a playoff for the U.S. Open.

Interesting Fact: The movie was filmed at the Kanawaki Golf Club in Kanawake, Que., outside of Montreal.

This movie isnt quite as good as the original but Jackie Mason, as the lead character, still provides some pretty good laughs. Randy Quaid also has some funny bits and Chevy Chase and Dan Aykroyd appear.