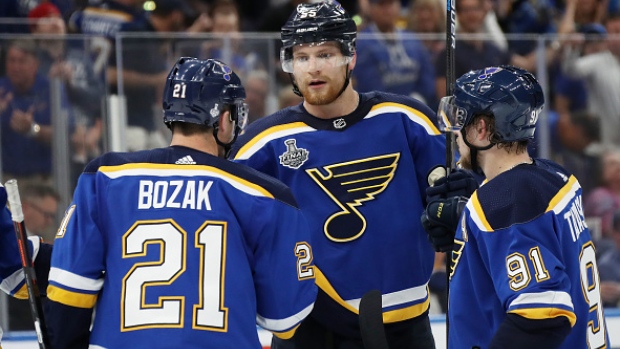 BOSTON — Imagine, for one second, Brayden Schenn skating in the Stanley Cup Final –wearing the spoked-B for the Boston Bruins instead of the Blue Note.

It almost happened, or so he thinks. Schenn said he got a call on U.S. Thanksgiving in November and believed he was being traded from the Blues to the Bruins.

“How close? I’m not too sure. But there were definitely rumours that I was coming here,” Schenn said. “It’s funny how it works out. Blues versus Boston in the Final. It’s crazy.”

The permutations are indeed crazy. If Schenn became a Bruin, maybe Charlie Coyle is watching this Final from his hometown of Weymouth, Mass., instead of scoring in it.

Schenn was far from alone. Make no mistake: the St. Louis Blues were open for business after a dismal start to the season. GM Doug Armstrong had his finger on the trigger to blow up the Blues.

“You talk to your agent. They know about it, too. You get put up on Frank Seravalli’s Trade Bait board all the time,” Schenn told a pack of reporters at the Cup Final’s Media Day. “There were some dark days at the beginning of the year.”

In mid-December, six Blues were on the TSN Trade Bait board. Captain Alex Pietrangelo was linked to the Toronto Maple Leafs. Schenn to the Bruins. Alex Steen’s name was out there. Veterans Jay Bouwmeester and Pat Maroon were likely ready to be flipped as trade deadline rentals.

“You try to stay away from reading things or listening to things,” Pietrangelo said Wednesday. “Maybe that part is a little bit easier for me because if anything was going to happen it would have to go through me anyway”

Only top prospects were considered off-limits. Rival managers said even when it came to sniper Vladimir Tarasenko, Armstrong’s response was: “Make me an offer.”

Amazingly, the same roster that Armstrong assembled last summer is the one that will take the ice in Game 5 on Thursday night at TD Garden with a chance to inch one win closer to the franchise’s first Stanley Cup. Tarasenko is now perhaps the front-runner to win the Conn Smythe Trophy among the Blues.​

Go figure. Sometimes the best trades are the ones you don’t make.

In this case, Armstrong admitted that he may have been saved from himself.

“You’ve got to be honest. There’s not many trades that time of year, so even if you want to do things, it’s hard to find a dance partner,” Armstrong told TSN on the night the Blues clinched the West. “That probably made it easier to stand pat.”

Around the time rumours were swirling in mid-December, days after Colton Parayko topped the TSN Trade Bait board, Blues players said Armstrong held a meeting with the leadership core to inform them he was “doubling down” on the roster.

Alternate captain Jaden Schwartz recalls that meeting occurring on Dec. 17 in Edmonton. The Blues were in 28th place.

“Things weren’t going well. We weren’t happy with where we were, he wasn’t either,” Schwartz said of his GM. “He told us he still believed in us and he wanted to stick with our group.”

Schwartz believed that had a calming effect, at least for those who didn’t have the benefit of a no-trade clause.

“We responded really well after that,” Schwartz said. “It was good for everyone to hear. At that time of the year, there was obviously a lot of rumours going around. I think he did it just to connect with us a little bit and let us know how he feels.”

Armstrong told his players he wasn’t going to sell then, but by the time he went on a scouting trip to Russia in early February, he still wasn’t sure. The Blues traded a Top 10-protected first-round pick to Buffalo in the Ryan O’Reilly trade on July 1, 2018 and he wasn’t sure whether that clause would need to kick in.

He watched the Blues’ turning point on television in Russia.

“To me the turning point was that Florida game [on Feb. 5], coming back in the third period, winning, and then going into Tampa and winning 1-0,” Armstrong said. “I think we beat Nashville back-to-back and we were no longer sellers after that.”

The season before, Armstrong irked the Blues’ core when he dealt Paul Stastny to Winnipeg on deadline day in 2018 while his team was just one point out of the playoff chase.

“You never know when you’re going to have a chance to have an extended run, but I knew last year we didn’t have a chance,” Armstrong said. “Thankfully, we never got to that part in February.”

Instead, Armstrong added Michael Del Zotto from Anaheim for a sixth-round pick as insurance on defence. It was his only trade of the season.

“I’m lucky that we didn’t do anything,” Armstrong said. “I’m very proud of the guys that this team came through the way they did.”

So is Schenn, even though it apparently would have worked out well either way.

“He didn’t panic. He held us together, believed in the group that he put together in the summer time,” Schenn said. “I’m glad I’m here.”