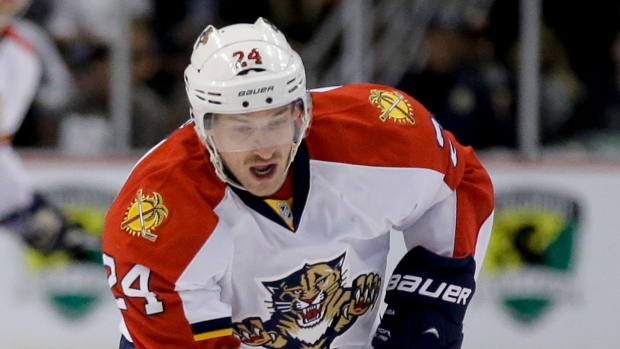 A couple of weeks removed from the opening of unrestricted free agency, the National Hockey League has settled into its annual lull – teams have a strong idea as to what their lineup will look like next season, and the only instant matters in need of resolution are those handful of restricted free agent arbitration cases around the league.

At quick glance through available cap information, we can see that most teams already have about 21 roster spots projected for 2015-2016. This, of course, isn’t the best news for the remaining unrestricted free agents. There simply are a finite number of NHL contracts to be handed out, meaning that a good portion of the names still floating around the available pool may be on the outside looking in come training camp.

Though that pool of talent has rapidly diminished over the last two weeks, there are still a couple of interesting names out there that could instantly improve a team’s lineup.

Brad Boyes is one of those players. A bit confusingly, Boyes (and his semi-team friendly $2.6-million cap hit, which expired in 2015-2016) was bought out by the Florida Panthers. The move does create $1.7-million in cap space and an additional roster spot for one of the organization’s younger players, but it’s hard to reconcile the buyout with pure performance issues. In two seasons with the Panthers, Boyes averaged about 18 goals and 37 points – very productive counting numbers for a forward who played mostly second and third-line minutes.

But, let’s say you’re a general manager, and maybe you’re a bit gunshy about signing a player in this position. If his production was legitimate in Florida, why would the team buy him out? Are the underlying numbers askew? Did Boyes ride a bit of a heat-wave in Florida? And, did the Cats front office recognize that before potential regression?
In a few words, I don’t sense that to be the case. Boyes is one of those forwards who seems to have a considerably positive impact on his teammates when he is on the ice, and that’s held true for much longer than two years.

By way of example, let’s talk about scoring chances for a moment. If I asked you to guess how many regular forwards over the last five years have had a positive impact on their team from a scoring chance perspective, what would be your number? Now, think of the names that would populate that list. Think of the contracts those names may carry. Then, guess how many of those players are unsigned.

The answer to that question is easy to pull. There are 45 forwards who have had a positive scoring chance impact on their teams in five consecutive years. The names that populate that list run the gauntlet of elite talent. Alex Ovechkin, Anze Kopitar, Claude Giroux, Corey Perry, the Sedin twins, John Tavares, Jonathan Toews, Marian Hossa, Mikko Koivu, Taylor Hall – I think you get my point. In total, 44 of our 45 names have contracts signed for next year, and only one of those 44-players is set to make less than $3-million AAV next season. (The average cap hit of this group is $5.8-million). 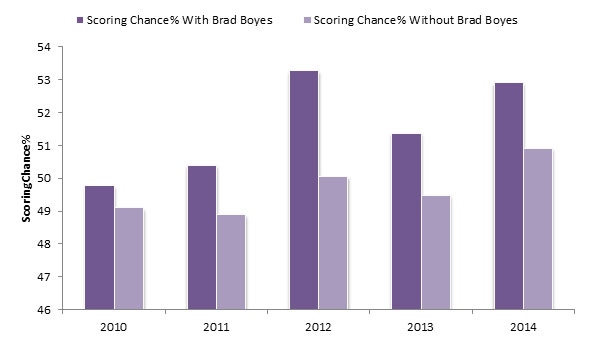 The point of my game of questions above is to highlight what should be patently obvious by now. It is really, really difficult to be consistently positively impactful from a scoring chance (or whatever metric you want to look at – Boyes is well above water in Goal% and Corsi%) perspective.

In Boyes’ case, we already know the raw individual production is there as it pertains to a bottom-nine winger. But, if the points dry up for a stretch, we can feel confident that Boyes’ game won’t go south. By way of offensive and defensive zone contributions away from the puck, Boyes can remain a reliable and productive fixture even in a period where his scoring randomly tapers off.

If you’re still on the fence about grabbing this guy on a team-friendly one or two-year deal, note the hidden skill he possesses – a proven ability to produce in the shootout format. Even if the number of shootouts goes down with 3-on-3 overtime, it never hurts to have a scorer like Boyes at your disposal.