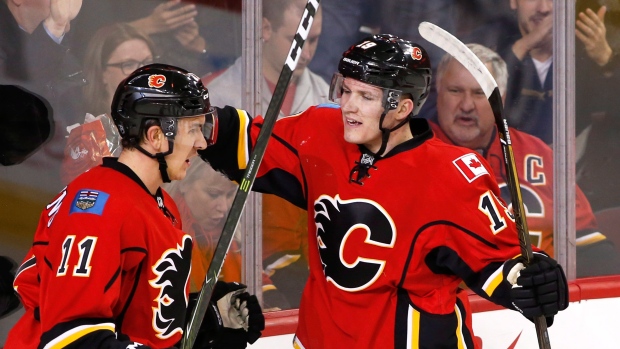 From the ashes, the Calgary Flames have risen.

Their turnaround (8-1-1 in the last 10 games) has been impressive, but not entirely unpredictable. It’s just another example of why you shouldn’t sour on a team solely on wins and losses, especially over such a small handful of games. In Calgary’s case, there was pretty clear evidence that the team – despite areas of weakness – was playing better hockey than what appeared on the scoreboard.

First: The team’s goaltending has stabilized. Just a couple of weeks ago, we talked about the brilliant play of backup Chad Johnson and why signing him was such a smart bet by their front office. Johnson’s relief has masked the team’s single biggest issue in October – woeful goaltending.

Second: The Flames looked shaky in the first few weeks of the season, but the same could have been said for the majority of the Western Conference. For the first time in ages, it seems as though power has shifted to the Eastern Conference and specifically the Metropolitan Division. The mediocrity of the West left the door open for the Flames to re-enter the playoff picture.

Third: About a month ago, we talked about the Flames’ forward group and how well they have been playing despite deficiencies in other areas. One might argue that Calgary’s depth offset surprisingly quiet production from superstars Johnny Gaudreau and Sean Monahan. For a lot of teams around the league, having stars go quiet would spell the end of a playoff berth in a hurry. Not so in Calgary.

In fact, the case can be made that one of the better lines in hockey currently plays up in Alberta, and it contains roughly zero of the names that you would expect.

That line is Matthew Tkachuk, Michael Frolik, and Mikael Backlund, each of whom has 15 points this season.

The line has beaten every five-man unit back, becoming a mainstay for head coach Glen Gulutzan. Their reliability has led to Gulutzan’s utter refusal to break the group up. Season-to-date, they’ve played more minutes than all but five other trios in the league.

Coaches who refuse to waver from a certain line or pairing usually have good reason to do so. In most cases, it has to do entirely with how much the group beats up on their competition. We see that league-wide right now with some of the most utilized forward lines. Below is a snapshot of the eight trios that have already logged 200 minutes with one another (data via Corsica). As you might have guessed, they tend to smoke the opposition.

The group is sorted by their respective Corsi% in the 2016-17 season. As you might have guessed, all but one is winning the battle on the shot clock. The same is true for scoring chances (again, seven of eight above water) and goals (ditto). The relationship is, again, obvious: The better guys tend to play with one another, the harder it is for a head coach to move one or more of the players up or down the lineup, even if some situations might call for it.

I draw your attention to the Calgary line here though, highlighting that their numbers are maybe the most impressive we have seen across the league, save the Bergeron group in Boston. This fun and fast line in Calgary is winning 57 per cent of the shots, 59 per cent of the scoring chances, and 67 per cent of the goals. Those numbers are, in a word, elite. Even if you ignore the goal data because of the limited minutes we’re talking about, the story remains the same: This group punishes defences in the defensive zone and tends to stay there until their shift is over.

Providing such a strong second-ish line – I say second-ish because, let’s face it, the diversity and talent in this group allow them to deploy differently on any given night – has bought Calgary time to figure out some of the more complex problems within the roster.

The team still needs to sort out some of the issues plaguing the defensive pairings (the Dennis Wideman/T.J. Brodie pairing, in particular, has been a miserable experiment), but the number of active problems challenging the team seems to dwindle by the day.

But that 11-points-in-16-games stretch to start the season? That’s just about forgotten right now. Flames fans can thank this exceptional grouping for some much-needed backbone and consistency during what could’ve been truly perilous times.