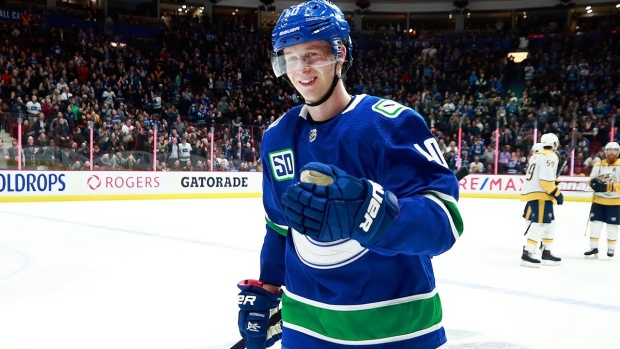 PHILADELPHIA - Elias Pettersson knew what was coming as soon as J.T. Miller wheeled around the circle and slid up to the quarterback’s spot on Saturday night.

“I knew I was going to shoot before I got the puck,” Pettersson said Monday morning.

Even if Pettersson gave Capitals netminder Braden Holtby fair warning, he still might not have stopped the short-side, one-timer blast in Washington.

It was the shot that Canucks fans have been craving, fittingly unleashed in the presence of the one-timer king himself, Alex Ovechkin, as he watched on from the bench.

So if Ovechkin is the king of the one-timer, then Pettersson might be the prince - just doing it from the opposite circle.

Pettersson is becoming the NHL’s next great one-timer threat. He may not score as many as Ovechkin, Steven Stamkos or David Pastrnak, but Pettersson is a two-dimensional threat with his elite shot and his all-world vision.

“He’s a smart kid. He knows that he’s got a good shot,” Canucks head coach Travis Green said. “The thing about ‘Petey’ is that he’s a good playmaker, too. He’s not just a shooter. You know, some might argue that we should have the puck in Petey’s hands to make plays more. Because Brock [Boeser] is more a pure shooter than ‘Petey.’ But I think if you have an option to shoot, it opens up other areas.”

Pettersson, now 21, has made 19 one-timer passes this season, tied for seventh-most in the NHL, according to data provided by SportLogiq. That’s already more one-timer setups than Pettersson made all of last season.

The amazing part for Pettersson is his one-timer is really just coming into its own. Saturday was just his second one-timer goal this season, but it’s a shot that wasn’t part of his repertoire until two years ago.

“My last season in Sweden, that’s when my one-timers were really starting to click,” Pettersson said. “That’s when I could use that as another good [weapon] in my arsenal. I feel like still it can get better every day.

“I’m trying trying to be more precise and always making sure I’m hitting the net. I can make sure it gets better by me getting stronger in the gym, getting faster hip rotation, all those small things that’s [related] to the one-timer.”

The difficulty for Pettersson, he said, is to get away from his pass-first instinct.

“I feel like lately, it’s been a few games now, I’m looking to shoot the puck more and not to be too cute, trying to find a pass all the time,” Pettersson said. “Get open, find a lane. Maybe not every game it’s going to be there because they have a guy on me. Whenever I feel like I have a good scoring chance, I take it.”

The addition of Quinn Hughes has turned the Canucks into a three-headed monster. There is Hughes at the top, who has his own special shot, plus Boeser to his left and Pettersson to his right.

The Canucks have improved to fourth in the NHL on the power play (26.7 per cent) thanks to a ridiculous 5-for-6 night in Nashville earlier on this road trip. They finished ranked 22nd last year at 17.1 per cent.

So, how do the Canucks become even more dangerous with Pettersson as a trigger man?

As a coach, it would be easy to do what every fan likes to shout from the stands and say “shoooooooot,” but it is Pettersson’s insistence on quality of shot over quantity of shot that has his coach impressed.

“I believe that other teams understand he has a good shot. But he’s smart enough to know that there’s a d-man coming out in his lane, he’s not just going to shoot it in the pads of a guy,” Green said. “Penalty killers are smart, they’re big, and they’re willing to block shots. If it’s not open, it’s not a shot he wants to take.”

So when we’ve seen Pettersson pull back and pass instead of shoot, it’s not because he isn’t confident in his shot.

“I don’t think he’s ever lacked confidence,” Green said. “[His shot] looked pretty good right from last year. That’s a combination of him learning the power play. I’ve talked about nuances of the power play that sometimes takes guys a long time in the league to understand.”

Green has asked Pettersson to study the best power plays in the league to get a leg up on “how they move, how they find seams.” The goal has been to “fast track” guys like Pettersson and Hughes.

“Boston, Tampa Bay, Chicago, a lot of that is learned over years together,” Green said.

Then there are the Capitals, many of whom have played together on the same unit for eight or 10 years.

“Washington … man, they make adjustments mid-power play,” Green said. “You take this away and they go ‘OK, we’re going to try this.’ Sometimes we’ve got to get an iPad and show them. We’re doing alright right now and the surprising thing is we’re still learning a lot today as we go.”

Imagine what that three-headed monster in Vancouver will look like with more time together, with a threat of Pettersson acting as either the brain or the brawn depending on the setup.