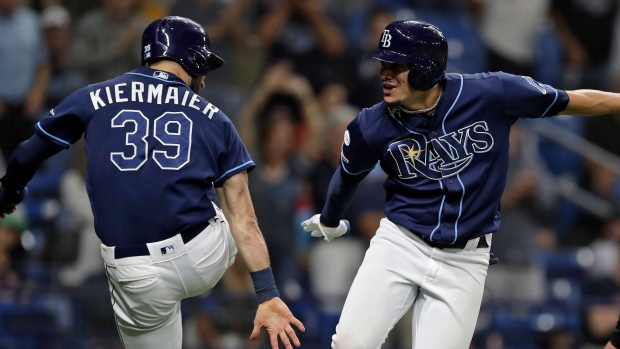 Ji-Man Choi, Brandon Lowe and Willy Adames homered during Tampa Bay's six-run fourth inning, and the Rays moved into sole possession of the second AL wild card by rallying for a 7-4 victory over the Boston Red Sox on Monday night.

"Big hit after big hit," Tampa Bay manager Kevin Cash said. "It was awesome. Maybe the most exciting inning of the year."

The Rays hold a half-game lead over Cleveland, which had the day off.

"It's fun but it's stressful at the same time because you just never know what's going to happen," Rays centre fielder Kevin Kiermaier said. "But at the end of the day, the beautiful thing about this game is that we control our own destiny."

The announced attendance was 8,779.

Boston slugger J.D. Martinez drove in a run to become the ninth player in franchise history to have at least 35 homers and 100 RBIs in multiple seasons. The list also includes David Ortiz, Jim Rice, Carl Yastrzemski and Ted Williams.

Jhoulys Chacín held the Rays hitless until one out in the fourth. After Austin Meadows and Travis d'Arnaud hit consecutive singles, Choi connected for a three-run drive.

Lowe had a solo shot that ended Chacin's night and Adames' two-run homer off Bobby Poyner (0-1) put the Rays ahead 6-4.

Tampa Bay went up 7-4 on Avisail Garcia's sixth-inning RBI double. He was thrown trying for a triple on a great on-the-fly throw from the right-field corner by Mookie Betts.

"That's probably the best throw I've ever thrown," Betts said. "I didn't know I could do that. It's fun to do stuff that you didn't know you could do."

Colin Poche, the ninth Tampa Bay pitcher, struck out pinch-hitters Christian Vazquez and Xander Bogaerts with two on in the ninth for his second save. Austin Pruitt (3-0) worked one inning.

Chacin allowed four runs and four hits over 3 2/3 innings. Between Milwaukee and Boston this season, the right-hander has given up 22 homers in 100 2/3 innings.

After scoring once in the second and third, Rafael Devers and Martinez hit RBI singles in the fourth. Devers has 113 RBIs.

The Rays have trailed in seven straight games and 13 of 14, but have gone 9-5 in those games.

"This one was probably the more challenging one because it was ugly (early on)," Cash said. "So, this was frustrating and really, really that much more encouraging for us to mount that comeback."

Rays lefty Blake Snell struggled in his second start since surgery to remove bone chips in his throwing elbow on July 29, giving up one run and two hits in 1 2/3 innings. The 2018 AL Cy Young Award winner threw 29 of 52 pitches for strikes.

"Guys picked me up," Snell said. "It's pretty exciting to see these guys do what they always do."

Meadows and right-hander Charlie Morton were voted co-winners of the Don Zimmer award as the Rays MVP by members of the Tampa Bay chapter of the Baseball Writers' Association of America.

Red Sox: LHP Eduardo Rodriguez (18-6) is slated to get the ball Tuesday night at Texas.

Rays: RHP Yonny Chirinos (9-5) will make his second appearance since being sidelined by right middle finger inflammation in early August against the AL East champion New York Yankees on Tuesday night. Yankees LHP CC Sabathia, moving to the bullpen for the post-season, is scheduled to make his first career regular-season appearance as reliever.