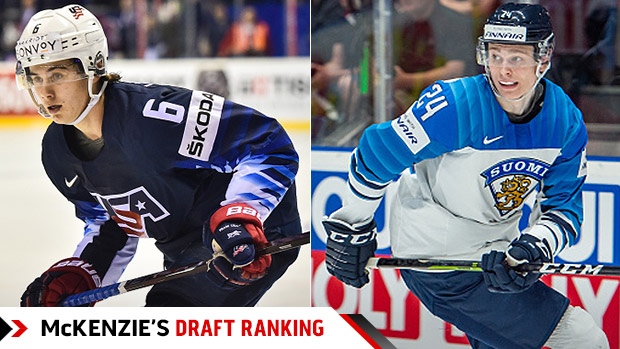 It is a lot closer than it appears; far tighter than the numbers would suggest.

When you factor in that on each of the September, January and April lists, Hughes was the unanimous No. 1 – getting 10 out of 10 votes from TSN’s panel of NHL scouts – and earned eight of 10 votes in the most recent June survey, well, it seems like Hughes is in a class by himself.

But that’s just not the case.

It is, rather, a two-man battle between Hughes, the U.S. Program’s all-time greatest scorer, and powerful 6-foot-2, 194-pound Finnish winger Kaapo Kakko.

Now, do we believe that the New Jersey Devils, who own the first pick at Friday’s NHL draft in Vancouver, are taking someone other than Hughes – who averaged more than two points per game this season? No, not for a minute. Though Devils’ GM Ray Shero has been coy about who the Devils will take, it’s virtually certain Hughes is their man.

Just as we are fully convinced the New York Rangers, with the second pick, will take Kakko, who scored six goals for gold-medal winning Finland at the 2019 World Championship last month in Slovakia.

So Hughes’ projected status as the first player taken in the draft is not really in doubt. Except TSN’s rankings list doesn’t represent a prediction of who will be taken No. 1 as much as it is a declaration of which player, in the eyes of scouts, projects to be the best player.

As one scout said, “It’s really close between [Hughes and Kakko] – almost too close to call.”

This scout, by the way, works for an NHL club that has Hughes No. 1 on its list.

But here’s why the numbers may be so skewed towards Hughes.

“Do you know how much time we spent in our meetings debating who should be No. 1?” the scout said. “Not much time at all. About two minutes. You know why? Because we knew we didn’t have to make that decision. We’re not really invested. There are a lot of tough calls in this draft. We spend a lot of time fighting over this guy or that guy and where to rank them, but no one, except New Jersey and the Rangers, need to do that [with Hughes and Kakko]. So we didn’t.

“We have Hughes at No. 1. We defaulted to that but I know our scouts are pretty evenly split on who [should be No. 1]. I’ll guarantee there are other teams doing the same thing.”

“Flip a coin,” said another scout surveyed by TSN. “It’s that close. I know some give a slight edge to Hughes simply because he’s a centre and Kakko plays the wing, or that Hughes has been the presumptive No. 1 all season.”

“It’s so close,” said yet another scout. “We leaned towards Hughes because we think he could be as impactful as Pat Kane was in Chicago [where Kane went No. 1 in 2007]. Let’s say [Hughes] doesn’t turn out to be as good [as Kane]. Worst-case scenario – and I’m not saying I think this will happen but let’s say it did – he’s [Arizona Coyote] Clayton Keller. What did Keller get in his rookie season, 23 goals? Keller is a really good player. That’s the [comparative] floor for Hughes and he’ll likely be better than that, maybe a lot better.”

There are, however, clubs who believe Hughes is indeed the clear-cut No. 1.

“He’s going to be a star,” another NHL scout said. “He’s a dynamic skater. He’s an elite playmaker. He’s an elite scorer. He has elite hockey sense and creativity. His feet and hands are quick and his mind processes the game even quicker.”

After Kakko’s performance at the World Championship, to say nothing of his record-setting goal-scoring performance this season in the top Finnish men’s league, two of the 10 scouts surveyed were won over by the Finn and gave him the edge.

“He’s bigger, stronger and better suited to play the pro game,” one scout said of Kakko. “He is a dominant player off the cycle. He’s a goal scorer but he’s also a creative playmaker. He’s going to be a first-line NHL winger with size, power and skill.”

One thing most everyone agrees with is that Kakko may be poised to make a more meaningful immediate contribution than Hughes next season in the NHL, simply because he’s so much bigger and so much more physically mature.

“Kakko’s a man,” said a scout. “Hughes still has to grow, to get stronger. It’s possible, for the first year or two, Kakko will have an edge, but our job is to project who is going to be the best over the long term. I wouldn’t bet against Hughes.”

TSN expanded the Hughes vs. Kakko debate to an additional 11 NHL clubs. Six of those 11 team representatives went with Hughes. Two chose Kakko and three clubs said it was too close to call. And repeating what was said before, because they don’t have to make the decision, they didn’t.

“If we had won the lottery, I feel like we would still be arguing about it because going into the lottery our people were evenly split and there was a lot of debate,” one club executive said.

One NHL GM summed up the duality of the debate best of all: “Our scouts have Hughes first. I like Kakko.”