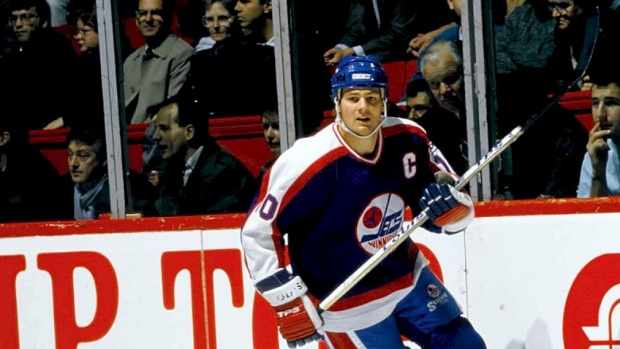 Over the past few days, Mike Keenan composed a text message to Dale Hawerchuk with perhaps his most poignant piece of coaching over their 42-year relationship.

“You’ve got one more faceoff to win,” Keenan wrote of Hawerchuk’s battle with cancer.

It was Keenan’s way of showing his support for one of the most resilient and competitive players he has ever crossed paths with – a path that includes their shared role in one of the most memorable faceoffs in hockey history.​

In the waning moments of Game 3 in the 1987 Canada Cup final between Canada and the Soviet Union, two of the greatest centres ever to play the game in Wayne Gretzky and Mario Lemieux deferred to Hawerchuk on the draw.

It’s the moment that produced the odd-man rush between Nos. 66 and 99 that is forever etched on the minds of fans across Canada.

Hawerchuk’s legacy will be equally long-lasting, just judging by the messages that flowed to his phone from around the hockey world in recent days and weeks.

One of the game’s great superstars in the glory days of the 1980s, Hawerchuk passed away at the age of 57 on Tuesday after a year-long battle with stomach cancer, his family announced.

The face of the original Winnipeg Jets franchise – and one of Canada’s best junior hockey players ever – was inducted into the Hockey Hall of Fame in 2001.

Keenan, beginning his coaching journey with the Oshawa Legionaries of the Toronto Metro Jr. B league, first coached the kid they called Ducky as a 15-year-old in 1978-79. What stood out then, even for a player deemed to be a childhood prodigy who broke Guy Lafleur’s goal-scoring record in the Quebec International Pee Wee tournament, turned out to be the hallmark of Hawerchuk’s NHL career.

“He was so resilient,” Keenan said. “He was the best player on our team as a 15-year-old. He thrived on the competition as a young man, and when we got into some heavy playoff battles, the other teams would really go after him. He didn’t back down. He bounced right back up. You could tell then that he had what it takes to be a superstar in the NHL.”

The entire country saw it over the next two years, playing for the Cornwall Royals in the Quebec Major Junior Hockey League.

Keenan always denied the narrative, but he and Hawerchuk always enjoyed playful banter whenever it came up.

“I would tell him we outplayed them in the final,” Keenan said. “And he would say, ‘Maybe, but we’ve got the Cup,’ and I couldn’t really argue with that.”

The Jets drafted the can’t-miss Toronto native first overall in 1981. Hawerchuk infamously inked his contract at the corner of Portage and Main in downtown Winnipeg after GM John Ferguson had him delivered in a Brinks truck, marking a rebirth of the franchise in the NHL.

Twenty-one picks later, the Jets drafted Hawerchuk’s Cornwall teammate and lifelong friend Scott Arniel with the first selection of the second round. Arniel ended up being Hawerchuk’s teammate for seven straight seasons – one in Cornwall and six with the Jets.

“He was Winnipeg’s big news. There was big hype and he was a big-time player,” said Arniel, now an assistant coach with the Washington Capitals. “He earned it all. He didn’t just have talent, Dale had this great drive and ambition, something that I don’t know if I’ve seen. He’s one of those people that the expectation of himself was so much greater than what anyone could put on him.”

Hawerchuk exceeded those lofty expectations. Hawerchuk posted 100 or more points in six of his first seven seasons in the NHL, including five straight from 1983-88.

The Jets said in a statement on Tuesday that “Dale Hawerchuk put Winnipeg and the Jets on the map the day he arrived in our city in 1981.”

So sad😢 what a incredible human being ❤️I’m thankful that Ducky was my friend and I had a chance to talked with him yesterday and say goodbye🙏this world is not same place without him,Eric you can be so proud of your dad🙏❤️Thoughts love and prayers for all your family❤️RIP DALE https://t.co/SKVHfxSFkB

“He just hated to lose,” Arniel said. “It didn’t matter if it was golf, baseball or hockey – he was extremely competitive.”

Hawerchuk is widely considered one of the best players ever to not win a Stanley Cup. The closest he got - the only time his team ever advanced past the second round - was the 1997 Stanley Cup Final with the Philadelphia Flyers, the last games he played before retiring at the age of 34 due to a degenerative hip problem.

His Jets just never had enough to sneak past the Smythe Division stalwarts in Edmonton and Calgary.

On the international stage, Hawerchuk wrote a different story. Tasked with coaching Canada in the 1987 Canada Cup, Keenan learned his lesson from betting against Hawerchuk in the 1980 Memorial Cup.

Hawerchuk was a borderline roster player on that ‘87 squad with 10 other future Hockey Hall of Famers, but caught Keenan’s eye with his work ethic in training camp.

“He told me: ‘We didn’t have you pencilled in, but the way you’re playing, there’s no way we can keep you out of the lineup,’” Hawerchuk recalled in a recent interview with TSN.

He ended up being one of the true difference-makers for Canada. Not only did Hawerchuk win the draw to setup the game-winning goal, but he ran interference in the neutral zone so Lemieux and Gretzky could sail toward the Soviet goal. He was also part of Canada’s 1991 Canada Cup victory.

“It was a privilege coaching him again,” Keenan said. “He was a really humble competitor, very coachable, and that’s what allowed that team to come together – because of the traits of people like Dale. These guys all came from different teams where  they were superstars, and he played a lot less than he would have in Winnipeg, but was so humble about it.”

Hawerchuk’s humility carried over to his post-playing career, coaching in the junior ranks. He was named head coach of the OHL’s Barrie Colts in 2010, where he posted five 40-plus win campaigns over nine seasons. Hawerchuk helped develop future NHL stars such as Mark Scheifele and Andrei Svechnikov in Barrie.

Rest In Peace Dale, was an honour to play for you.

But Hawerchuk called the opportunity to coach his son, Ben, in the OHL one of his greatest honours in hockey.

Hawerchuk was forced to take a leave of absence from coaching last year after his cancer diagnosis. He told Arniel in a subsequent phone call: “I’m beating it. This thing isn’t going to get me.”

That appeared to be the case when Hawerchuk triumphantly rung the Bell of Hope at a Barrie hospital on April 13 at the conclusion of his treatment.

It was then, in the middle of a pandemic, that a courageous player who gave the hockey world so many indelible moments said that these trying times were a moment of opportunity for everyone to appreciate the little things.

“When you wake up, it’s refreshing,” Hawerchuk told the Winnipeg Sun. “I sure appreciate when I see that sun pop over the rise every morning. You start to realize that everything we’ve had was such a privilege. We take that privilege for granted too often. The cancer’s helped me realize that a bit. But this coronavirus is also going to help, not only me, but everybody. We can’t take so many things for granted anymore.”

Hawerchuk is survived by his wife, Crystal, and children Eric, Ben and Alexis. Funeral arrangements were pending.