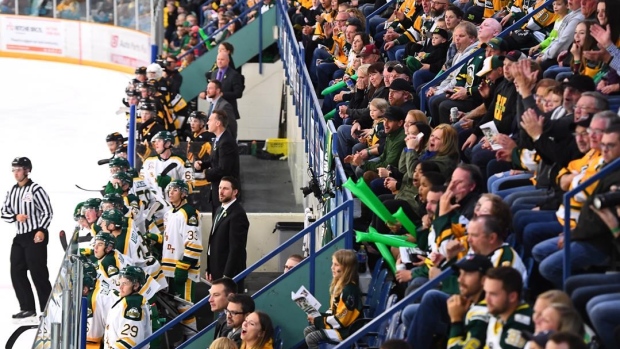 At approximately 4:50 p.m. on Monday, the St. Augustine Catholic Church in Humboldt, Sask., will toll its bells to mark the second anniversary of the Humboldt Broncos bus crash.

A small gathering was planned, but during this time of self-isolation and social distancing, Humboldt has encouraged all citizens to observe a moment of silence at the same time, no matter where they may be.

Two years later, the hearts of the Broncos’ families still ache with a pain that will never subside. But this second anniversary is also a reminder of the incredible work they do, focusing their powerful voices to make positive change out of the tragedy.

“We have been overwhelmed, time and time again, that the world has really come to our doorstep,” said Celeste Leray-Leicht, whose son, Jacob, died in the accident. “We would just like to pay it forward.”

Here are three initiatives, led by the Broncos’ families, born out of the April 6, 2018 crash:

Two days after the crash, on the morning Leray-Leicht was gathering her family to drive to Saskatoon to visit Jacob’s body at the morgue, the idea became clear to her.

“We were in complete shock. I had been praying to God, looking for some purpose,” Leray-Leicht said Sunday. “It became quite clear to me, [Northern Lights] is where we’ll focus.”

Leray-Leicht is a teacher in Humboldt. Two months before the crash, she had begun attempting to connect her students with First Nations youth in northern Saskatchewan, an idea that sprung from another tragedy, a shooting spree in La Loche, Sask.

When support poured in from across the country – especially from First Nations communities – it cemented the idea for Northern Lights Movement for Kids, an initiative to encourage indigenous and non-indigenous youth to connect with each other.

“There are lots of indigenous people who are grief stricken often,” Leray-Leicht said. “I hate the idea of others suffering. I was really personally moved by the 2016 shooting [in La Loche] and I have faith and hope in kids that we can do really good things to build from so many negatives.”

Leray-Leicht said Northern Lights was originally designed to have students trade letters or postcards like pen pals, but during this time of physical distancing, the goal is to connect youth of all ages on social media.

“I’m here to learn. This has gotten me into a better headspace, out of my comfort zone,” Leray-Leicht said. “I know that Jacob’s wings are giving me strength.”

A number of Broncos families – including the Brons, Joseph, Hunter and Thomas families – have banded together as part of Safer Roads Canada to advocate for change in licensing and training in the country’s commercial trucking industry.

“We needed to put our energy somewhere,” Carol Brons said. “This seemed to be a good fit. This gives us focus.”

Brons and Chris Joseph, the ex-NHLer who lost his son, Jaxon, in the crash, are members of the organization’s board. Safer Roads made headway last year in the form of a petition for federally mandated minimum training. It was set to be read in the House of Commons, but the session in Parliament closed in May, 2019 and the initiative hasn’t been taken up again in Ottawa.

“We’re trying to get something passed across Canada, where truck driver is a profession, a certification,” Brons said. “You shouldn’t get to start out in a flat bed. How is it possible that being a truck driver has less training required than a hairdresser?”

The driver of the semi that slammed into the Broncos’ bus, Jaskirat Singh Sidhu, said the crash “happened because of my lack of experience” on the day he was sentenced to eight years in prison for killing 16 and injuring 13 others.

Brons said the Broncos’ accident has opened up her eyes to “loopholes” in Canada’s transport laws. Not only are records not kept at the federal level, Brons said, but the standards set by the government are up to each province to enact and enforce, which is far from uniform.

“We’ve become complacent. Too much of this is reactive, not a lot of it is proactive,” Brons said. “We have people’s attention because of the magnitude of the Broncos’ crash, but the sad part is this happens every day across Canada.”

The third Green Shirt Day will be held on Tuesday, a day that encourages people around the continent to wear a green shirt – any shade of green – for organ donor awareness and registration. Logan, then 21, signed his organ donor card just weeks before the accident.

“This has exploded. It’s become way bigger than we ever thought it would be,” said Bernie Boulet, Logan’s mother. “Green Shirt Day has blossomed in a short period of time.”

The exact statistics are difficult to pinpoint, but Bernie said that since the crash, more than 300,000 Canadians have registered to become organ donors. That increase included a dramatic spike in April last year around Green Shirt Day.

“It’s about having people register, but it’s really about what I call the ‘kitchen table talk,’ and that is to find out your loved one’s wishes,” Bernie said. “It’s one less thing to worry about in a time of tragedy. Tell your family, be inspired. Every person who registers and talks about it, something like four more people register. It spreads like a ripple across a lake.”

Bernie said it would have been easy for the Boulets to “shut our doors, close our blinds, do nothing and be introverted.” But Logan’s incredible legacy, living on in others, has given the Boulet family a purpose to keep sharing his story.

“We have a voice and we want to use this situation to find positives,” Bernie said. “This has helped honour him, and it’s been very helpful in our whole grieving process. More than 4,000 people in Canada are waiting for organs, and each person that registers represents hope.”