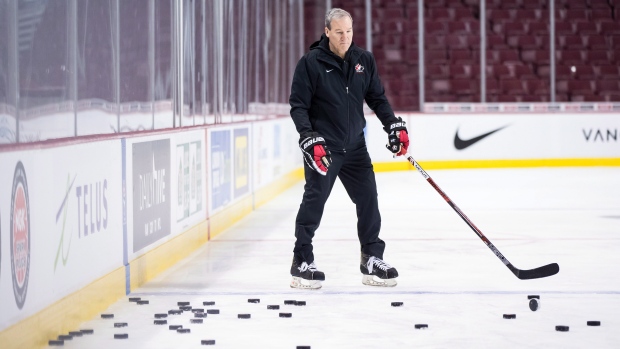 VANCOUVER — Tim Hunter hoisted the Stanley Cup and led the NHL in penalty minutes twice before he got bit by the coaching bug late in his career.

He said he realized he wanted to be a coach while playing under Pat Quinn with the Vancouver Canucks from 1992 through 1996.

It’s only fitting that it’s here, in the shadow of the Big Irishman’s statue inside the building on Pat Quinn Way, that Hunter has earned his moment to shine as Team Canada’s head coach at the World Junior Championship.

Hunter certainly has applied a few lessons learned from the Hall of Fame coach. He recalled his favourite story on Friday when Quinn went on a tirade during an intermission one night in Winnipeg.

He said Quinn came in the locker room and swatted a five-gallon Gatorade bucket “like it was a cup across the table.

Quinn then took aim at his next target.

“They had these big 50-gallon drums, steel drums as garbage cans, and I’m looking at him and he boots this can and it didn’t move,” Hunter said. “Then he left the room and I’m like ‘Wow!’ I go over and moved the can and it’s half full of cement.”

“You have to rattle their chains every now and again,” Hunter said. “But yeah, I’m going to make sure I don’t kick any cans of cement.”

Hunter, now 58, has played second fiddle for most of the last two decades. After an 815-game NHL career, he followed Ron Wilson around as an assistant coach in the league for more than 1,100 games with stops in Washington, San Jose and Toronto, before re-joining the Capitals for an abbreviated season under Adam Oates.

It wasn’t until 2014, at the age of 54, that Hunter finally became a head coach with the WHL’s Moose Jaw Warriors. That has caused him some regret.

This is Hunter’s moment on the big stage, his chance to impress as a potential NHL head coaching candidate.

Coaching in the NHL is increasingly a young man’s game, but Hunter has shown that he has evolved. With the Maple Leafs, Wilson and Hunter developed a reputation that they were at times dismissive with players.

The current generation of NHL players, and even more so the millennials that Hunter is now guiding, takes more listening. They want to be engaged and involved in the process, not told what to do.

Hunter appears to have learned that.

“Last night after the game, I had my points to say, then I went around the room and I had every player talk about his feelings of how we played so far and how they played in the game,” Hunter said on Friday. “It was great because a lot of guys said the same thing, they had real good comments. They all know where we’re heading, they all know where we need to improve. It was great conversation. When you have a family, guys can hold themselves accountable and check their egos at the door. They were honest and upfront about things and upfront about things that we need to work on.”

Make no mistake, Hunter still carries a stick – and he isn’t afraid to use it. He torched 17-year-old Alexis Lafreniere, the expected No. 1 pick in the 2020 NHL Draft, for his play against Switzerland on Thursday night.

“He was out there skating around like it was free skate, lots of circles in his game,” Hunter said of Lafreniere. “We talked to him about it and showed him the video and explained to him. I told him ‘At the start of the game, you’re going to show me whether you’ve understood this or not. If you don’t, we’re going to limit your ice time.”

It will now be up to Hunter to re-engage younger, high-end players like Lafreniere and Joey Veleno to see if he can squeeze the most out of them for the benefit of Canada. They were picked for a reason. They can make plays others cannot.

Really, the rest of the tournament will be about the buttons Hunter chooses to push, and how his team responds. He pumped them up before the tournament, pumped the brakes after the 14-0 win over Denmark, and now will need to pump the tires on special teams.

For just the third time in the last nine tournaments – a span of 47 games – Team Canada was outscored by their opponent on special teams.

Not only is an entire nation watching Hunter’s every move, but so is the NHL. He may never get a better shot.

But for now, Hunter said gold is his only focus.

“It means a lot. I’m honoured and proud to coach this team,” Hunter said. “Look at what’s happening, all you people here interviewing Tim Hunter so that’s a pretty cool thing. I believe in myself and it’s an honour to be a part of Hockey Canada.”