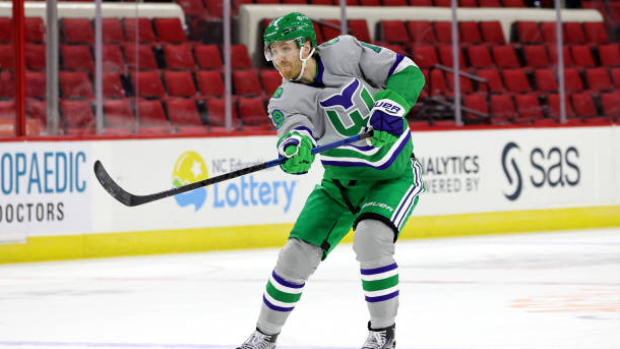 Don Waddell was ready to hang up his skates. He began a portable toilet business (yes, seriously) after injury shortened his seventh minor-league season, when a call from Flint Spirits coach Rick Dudley sucked him back in again.

Dudley wanted to know if Waddell was willing to come back for one final season as a player-coach in the IHL.

The portable toilet business was put on hold. His sister took over and helped run it, with the company slogan: “Your s#*$ is my bread and butter,” while Waddell’s hockey life resumed.

Flash forward to Saturday night, which marked Waddell’s 1,000th career NHL regular season game as a general manager. Quite an accomplishment for the 62-year-old hockey lifer who appeared in exactly one NHL game as a player.

His recommendation for anyone in the portable toilet business applies during a global pandemic: “Wash your hands,” Waddell said, laughing.

“I always tell people all the time, it doesn’t matter what your business: enjoy what you’re doing, whenever you’re doing it,” Waddell said on Saturday, when asked about his start in business. “Because you’re probably not going to be doing it for a lifetime, but if you put your time in and commit to something, it could lead to something bigger. That one worked out for me.”

On the DFO Rundown Podcast, Waddell dished about the first period shift that ensured he’d never see a second NHL game, being one of the last cuts from the 1980 Miracle on Ice team, as well as some newsworthy items.

> Waddell said the Hurricanes and Dougie Hamilton’s camp have agreed to table contract discussions until after the season. Hamilton, 27, is in the final year of a six-year, $34.5 million deal signed with the Calgary Flames in 2015.

“We’ve had many talks, we talked again last weekend,” Waddell said. “You know, Dougie wants to stay here. We’ve talked to him, we love Dougie, we want him to stay here. He fits in well with our team, our coaches like him.

“I truly think Dougie wants to stay here. We’ve decided that it would be best for both us to just wait until the end of the year, let’s sit down and see if we can hammer out a deal, put it on the back-burner so Dougie can worry about playing hockey at this point.”

> Waddell believes the ‘Canes are “getting close” to an extension for coach Rod Brind’Amour, who is also in the final year of his deal with the team.

“We’ve had lots of conversations,” Waddell said. “I’ve been with a lot of coaches but he’s as focused on coaching as anybody I’ve ever seen. It doesn’t matter if we’re not playing for a week, he’s still thinking about coaching.

“Great discussions. We’re getting close, it’s just a matter of time. I’m 99.9 per cent that Rod will be our coach for this franchise for the upcoming years for sure.”

> On whether Waddell is more aggressive or more willing to tinker with his roster at the deadline than most other managers:

“Yeah, I think so,” Waddell said. “Let’s face it, I have an owner in Tom Dundon that is very passionate about the team. He likes to be involved and know what’s going on and everything else. We won eight games in a row and he wants to know why it’s not nine games.

“He’s a driver, in a good way. It’s a challenge every day – ‘Who have you talked to? What’s going on in the hockey world?’ He wants us to be as best as we possibly can. We’re a team that spends to the cap and we’ll be at the cap for a long time. He’s committing the dollars, the resources that give us the best opportunity, so we have to make sure we’re on top of things to make our hockey team better.”

“We really like our team. A right-hand shot defenceman, I’ve got to be honest, that’s something I’ve asked around about. And then another top nine forward, potentially. Easier said than done. As you go through this, especially a shortened year, we’ve played one game with our full roster and that was opening night.

“We’re also looking at all of our positions from a depth standpoint. Is there some guys out there that we can maybe just take the money [contract]? We’re not in the business of trading too many assets, we did that last year at the deadline. Right-shot defenceman, top-nine forward, and potentially some depth – that’s what we’re looking for.”

> On his most satisfying trade as a general manager:

“It wasn’t a big trade, but trading Ray Ferraro [to St. Louis in 2002]. Ray was a big part of our team there [in Atlanta] and he was getting toward the end of his career. I went and talked to him and said ‘Ray, do you want to go some place?’ And he really did, and he told me which team, and I was fortunate to be able to work it out. A lot of times you feel bad about doing things [making trades], but that was one I felt really good about.”

> On what it’s like trading with other general managers:

“I always joke that there’s a few guys over the years that if you called them and offered them a first-round pick for a third-round pick, they’d have to tell you that they’ll get back to you.