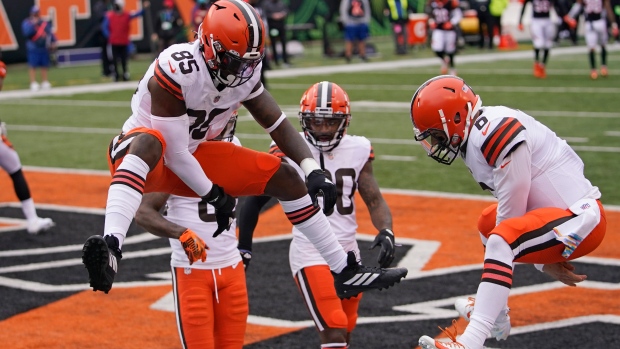 CINCINNATI — Baker Mayfield brushed aside all the outside noise about his dismal performance last week. Then, nursing sore ribs, he shut up all the critics.

“What criticism? What are you talking about?” Mayfield quipped after throwing five touchdown passes and leading the Browns past the Cincinnati Bengals 37-34 on Sunday.

The quarterback actually overcame a terrible start against the Bengals. He went 0 for 5, including an interception on his first attempt of the game . Mayfield then completed the next 22 of 23 passes. The last was most important, a leaping grab by Donovan Peoples-Jones in the end zone with 15 seconds left to win it for the Browns (5-2).

“He’s such a competitor,” Browns coach Kevin Stefanski said. “He doesn’t give up. That first throw, we wanted to take a shot there, and they made a nice play. He didn’t back down, and every time I looked at him on the sideline he had that steely look in his eyes.”

Cincinnati rookie Joe Burrow turned in another terrific game, but again it wasn't enough. He hit 35 of 47 passes for a season-high 406 yards and three touchdowns, including a 3-yard scoring pass to Giovani Bernard on fourth-and-1 to give the Bengals a 34-31 lead with 1:06 left.

But the Bengals' defence couldn't stop Mayfield, and Browns receivers who made some great catches as they worked down the field. On the first play of the drive Mayfield slipped out of a near sack to complete a 13-yard pass to Peoples-Jones.

“We got on the field and everyone was saying, ‘We’ve got to get to the 30 for a field goal,’ and I told the guys, ‘Screw that, we’re going to win it,’” Mayfield said.

The top overall draft pick in 2018 was 22 for 28 for 297 yards. Rashard Higgins had six catches for 110 yards, and tight end Harrison Bryant had two touchdown catches.

With running back Joe Mixon out with an injured foot, the Bengals relied on Burrow, who has thrown for more than 300 yards in five of the seven games of his rookie year. Cincinnati managed only 81 yards on the ground, and that included 34 from Burrow.

This was the first game the Bengals were permitted by the state of Ohio to have a slightly larger crowd. The reported attendance was 9,732 with fans spread out through all the decks of Paul Brown Stadium with plenty of social distancing.

The Bengals had lost Mixon and cornerback William Jackson III (concussion) to injuries during the week. Their offensive line took another blow when they lost more starters to injuries in Sunday's game: OT Jonah Williams (neck) and C Trey Hopkins (concussion) in the second quarter. Tackle Bobby Hart also left with an injury but there was no update.

Bengals veteran defensive end Carlos Dunlap has been vocal about his reduced role, even while the rest of the defensive line has been affected by injuries. The trade rumours have been rampant and after getting on the field sparingly Sunday, he apparently had enough. Soon after the game, he tweeted that he was putting his 6,000-square-foot apartment up for sale, noting helpfully that he'll sell it furnished or unfurnished. He was not made available for interviews after the game.

Browns: WR Odell Beckham Jr. hurt his knee in the first quarter and did not return. The team said he will have an MRI on Monday.