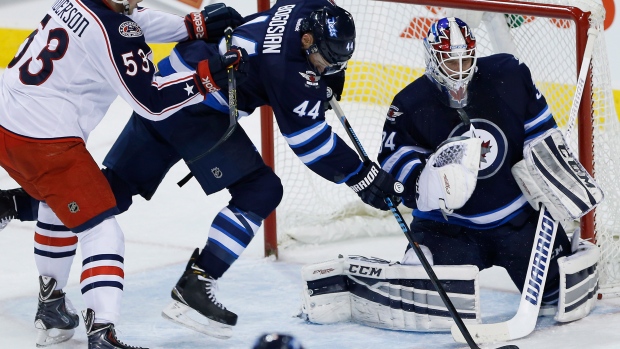 WINNIPEG - Michael Hutchinson is planning to spend the NHL all-star break in New York City, but there could be a change in his plans.

The Winnipeg Jets rookie goalie made 29 saves on Wednesday as the Jets (26-14-8) stretched their winning streak to a season-high five games with a 4-0 victory over the Columbus Blue Jackets (20-22-3).

Blue Jackets goalie Sergei Bobrovsky, who's slated to play in his first all-star game Sunday in Columbus, was helped off the ice in the second period after appearing to hurt himself stretching to stop a wide shot by Jets forward Michael Frolik.

Bobrovsky didn't return to the game and general manager Jarmo Kekalainen told the Columbus Dispatch that Bobrovsky had a lower-body injury and will have an MRI on Thursday.

It was Hutchinson's second shutout of the season and the team's third as Winnipeg outshot Columbus 30-29.

"It would be awesome," Hutchinson said. "You grow up watching the all-star game as a kid. To be able to participate, every single player in the league wants the chance to do that. Just to kind of be mentioned is an achievement in itself."

But he wasn't about to look up a new flight when it was pointed out Columbus is sort of on the way to New York.

"I guess there was some talk, but there's so many good goalies in the league that, you know, I'm not really holding my breath on anything."

Hutchinson went into the game third among the league's goalies with a 2.00 goals-against average and second in save percentage with his .932.

Bobrovsky stopped nine of the 12 shots he faced and was replaced by Curtis McElhinney.

Winnipeg scored on its first two shots of the game, with Blake Wheeler getting his 13th of the season at 1:08 and Evander Kane following up with his 10th on the second shot at 6:06 of the first period.

Fans gave the players a loud, standing ovation as the seconds counted down. The last time Winnipeg had a shutout at home was Dec. 31, 2013, a 3-0 victory over Buffalo.

The Blue Jackets have been shut out three times this season and had won their past two games during this three-game road trip.

"I don't really know the extent of his injury right now, but he's the backbone of this team and hopefully he'll be back on the ice as soon as possible," Columbus centre Ryan Johansen said of Bobrovsky.

"It sinks all the energy out of the bench. He's the most important player on our team and he goes down with an injury. You don't want to see that on any team."

The Blue Jackets have three players selected to make their all-star debut — Bobrovsky, Johansen and Nick Foligno. It's the first time the franchise has had more than one player selected to play in the game.

Defenceman Dustin Byfuglien is the only Jets player participating in the game.

Jets head coach Paul Maurice said if Bobrovsky can't play and Hutchinson gets tapped on the shoulder, he'd be happy for him — but a bit worried, too.

"We love Hutchie," Maurice said. "I'm not excited about goaltenders going to all-star games. It's the one lousy position in that game.

"How could you not be just enamoured by the way he's played? There are a lot of good goaltenders in this league, but he would certainly be a guy who's earned it."

The Jets go into the break picking up points in seven straight games (6-0-1).

Wheeler opened the scoring when he took a pass from Andrew Ladd and got a backhand shot off as he was spinning around and falling down in the slot.

"Just rest," Wheeler said of his upcoming plans during the break. "I think that's the key. This is a good opportunity. We've played a lot of hockey here, especially recently."

Kane scored after taking a dropped pass by Mark Scheifele just outside the top of the right face-off circle and firing a low shot at Bobrovsky, who had to look back in the net after the puck went through his pads at 6:06 for the 2-0 lead.

Some good saves by Hutchinson and blocked shots by the Jets kept Columbus off the scoreboard in the opening period in which the Blue Jackets outshot Winnipeg 14-6.

Jay Harrison's point shot went through traffic and was tipped in by Slater at 4:45 of the second. Jacob Trouba, making his return after missing 16 games with an injury, assisted on the goal.

Bobrovsky was helped off the ice with 12:16 left in the period. Forward Jeremy Morin had already left with an upper-body injury and didn't return.

The Blue Jackets were then hit with an unusual bit of bad luck.

The blade of Columbus defenceman Fedor Tyutin's left skate fell off on the ice near his team's goal with 8:18 remaining in the period. Tyutin could barely balance and tried to position his body to block any shots. He was then supported by a teammate as he made his way to the dressing room, but returned to the game.

Winnipeg soon made it 4-0 when Thorburn scored on a rebound with 5:50 remaining. The Jets flipped the table in the middle frame, outshooting the Blue Jackets 17-7 to go ahead 23-21.

Hutchinson had fans chanting his name in the third period after he robbed a close shot by Columbus centre Brandon Dubinsky with about eight minutes left.